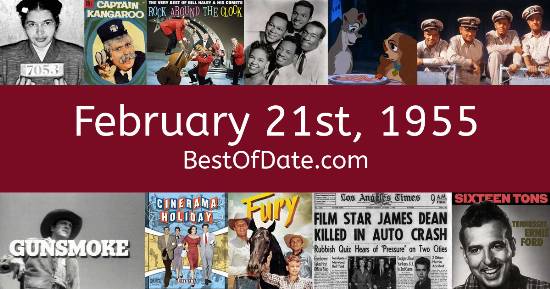 The best-selling single on February 21st, 1955 was "Sincerely" by The McGuire Sisters.

The date is February 21st, 1955, and it's a Monday. Anyone born today will have the star sign Pisces. In music, the song "Sincerely" by The McGuire Sisters is the best-selling record at the moment.

Tailfins on cars are extremely popular at the moment. The design looks futuristic, almost like a rocket or the twin rudders on the back of an airplane. If you were to travel back to this day, notable figures such as Albert Einstein and James Dean would be still alive. On TV, people are watching popular shows such as "The Ed Sullivan Show", "What's My Line?", "The Gene Autry Show" and "The Danny Thomas Show".

Children and teenagers are currently watching television shows such as "Looney Tunes", "Crusader Rabbit", "Adventures of Superman" and "Lassie". If you're a kid or a teenager, then you're probably playing with toys such as Foto-Electric Baseball, Feed the Elephant, Roy Rogers Plastic Figures and Matchbox toy cars.

These are trending news stories and fads that were prevalent at this time. These are topics that would have been in the media on February 21st, 1955.

News stories and other events that happened around February 21st, 1955.

Check out our personality summary for people who were born on February 21st, 1955.

Television shows that people were watching in February, 1955.

If you are looking for some childhood nostalgia, then you should check out February 21st, 1961 instead.

Soccer player.
Born on February 21st, 1991
He was born exactly 36 years after this date.

Dwight David Eisenhower was the President of the United States on February 21st, 1955.

Find out what your age was on February 21st, 1955, by entering your DOB below.
This information is not saved on our server.

Here are some fun statistics about February 21st, 1955.