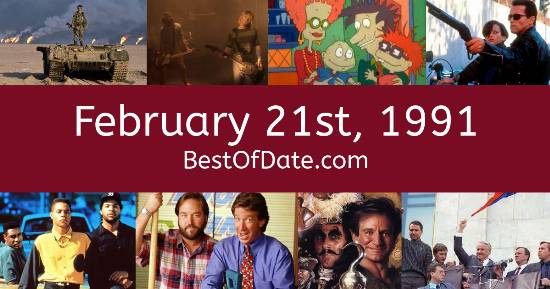 Songs that were on top of the music singles charts in the USA and the United Kingdom on February 21st, 1991.

The movie "Sleeping with the Enemy" was at the top of the box office on February 21st, 1991.

The date is February 21st, 1991 and it's a Thursday. Anyone born today will have the star sign Pisces. In America, the song All The Man That I Need by Whitney Houston is on top of the singles charts.

Over in the UK, Do The Bartman by Simpsons is the number one hit song. George W. Bush Snr. is currently the President of the United States and the movie Sleeping with the Enemy is at the top of the Box Office. In the United Kingdom, John Major is the current Prime Minister.

It's 1991, so the airwaves are being dominated by artists such as Bryan Adams, Michael Jackson, Roxette, R.E.M., Color Me Badd and Paula Abdul. A new movie called "The Silence of the Lambs", starring Anthony Hopkins and Jodie Foster, has just been released in movie theaters. In Europe, the Soviet Union is continuing to unravel as Lithuania officially declares its independence from the USSR.

Two Provisional IRA bombs have exploded at Paddington station and Victoria station in London. If you were to travel back to this day, notable figures such as Miles Davis, Freddie Mercury, Robert Reed and Anthony Perkins would all be still alive. On TV, people are watching popular shows such as "Sherlock Holmes", "Married... with Children", "One Foot in the Grave" and "Twin Peaks".

Meanwhile, gamers are playing titles such as "Duck Hunt", "Super Mario Land", "Golden Axe" and "Phantasy Star II". Kids and teenagers are watching TV shows such as "Muppet Babies", "Round the Twist", "Rosie and Jim" and "TaleSpin". Popular toys at the moment include the likes of Cabbage Patch Kids, Sylvanian Families, Koosh Ball and the Game Boy.

If you are looking for some childhood nostalgia, then check out February 21st, 1997 instead.

George W. Bush Snr. was the President of the United States on February 21st, 1991.

John Major was the Prime Minister of the United Kingdom on February 21st, 1991.

Enter your date of birth below to find out how old you were on February 21st, 1991.

Here are some fun statistics about February 21st, 1991.