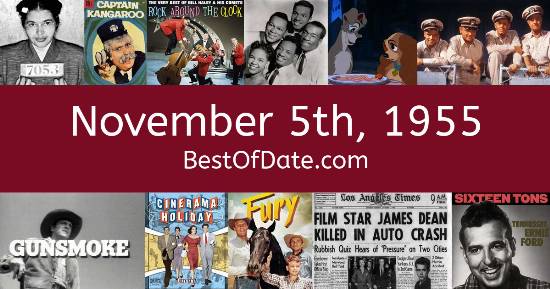 The best-selling single on November 5th, 1955 was "Autumn Leaves" by Roger Williams.

The date is November 5th, 1955 and it's a Saturday. Anyone born today will have the star sign Scorpio. Currently, people are enjoying their weekend.

It's November, so the evenings are getting darker and the days are getting colder. In music, the song "Autumn Leaves" by Roger Williams is the best-selling record at the moment. Dwight David Eisenhower is currently the President of the United States and Sir Anthony Eden is the Prime Minister of the United Kingdom.

On TV, people are watching popular shows such as "What's My Line?", "The Cisco Kid", "You Bet Your Life" and "The George Burns and Gracie Allen Show". Kids and teenagers are watching TV shows such as "Looney Tunes", "Crusader Rabbit", "Father Knows Best" and "Captain Kangaroo". If you're a kid or a teenager, then you're probably playing with toys such as Mr. Potato Head.

If you are looking for some childhood nostalgia, then check out November 5th, 1961 instead.

Singer.
Born on November 5th, 1959
He was born exactly 4 years after this date.

Spanish Youtube personality.
Born on November 5th, 1988
He was born exactly 33 years after this date.

Indian cricketer.
Born on November 5th, 1988
He was born exactly 33 years after this date.

Dwight David Eisenhower was the President of the United States on November 5th, 1955.

Sir Anthony Eden was the Prime Minister of the United Kingdom on November 5th, 1955.

Enter your date of birth below to find out how old you were on November 5th, 1955.

Here are some fun statistics about November 5th, 1955.

Have something to say about November 5th, 1955?