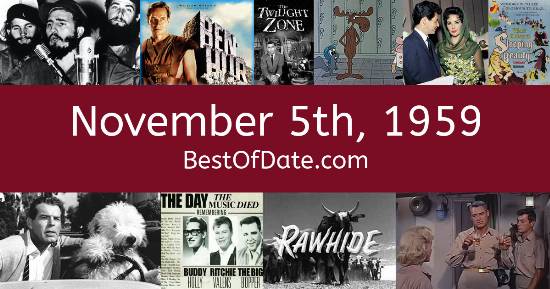 The best-selling single on November 5th, 1959 was "Mack the Knife" by Bobby Darin.

The date is November 5th, 1959 and it's a Thursday. Anyone born today will have the star sign Scorpio. It's November, so the evenings are getting darker and the days are getting colder.

In music, the song "Mack the Knife" by Bobby Darin is the best-selling record at the moment. Dwight David Eisenhower is currently the President of the United States and the movie Pillow Talk is at the top of the Box Office. In the United Kingdom, Harold Macmillan is the current Prime Minister.

If you were to travel back to this day, notable figures such as Clark Gable would be still alive. On TV, people are watching popular shows such as "The Danny Thomas Show", "Tonight Starring Jack Paar", "Maverick" and "77 Sunset Strip". Kids and teenagers are watching TV shows such as "Crusader Rabbit", "The Adventures of Spunky and Tadpole", "Clutch Cargo" and "Snooper and Blabber".

If you're a kid or a teenager, then you're probably playing with toys such as Tonka trucks, Foto-Electric Baseball, Toy Guns and the Hula Hoop.

If you are looking for some childhood nostalgia, then check out November 5th, 1965 instead.

Spanish Youtube personality.
Born on November 5th, 1988
He was born exactly 29 years after this date.

Indian cricketer.
Born on November 5th, 1988
He was born exactly 29 years after this date.

Dwight David Eisenhower was the President of the United States on November 5th, 1959.

Harold Macmillan was the Prime Minister of the United Kingdom on November 5th, 1959.

Have something to say about November 5th, 1959?

Enter your date of birth below to find out how old you were on November 5th, 1959.

Here are some fun statistics about November 5th, 1959.