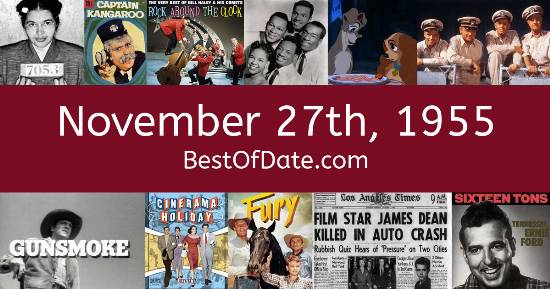 The best-selling single on November 27th, 1955 was "Sixteen Tons" by Tennessee Ernie Ford.

The date is November 27th, 1955, and it's a Sunday. Anyone born today will have the star sign Sagittarius. Currently, people are enjoying their weekend.

In America, Thanksgiven Day has come and passed. It's November, so the evenings are getting darker and the days are getting colder. In music, the song "Sixteen Tons" by Tennessee Ernie Ford is the best-selling record at the moment.

Tailfins on cars are extremely popular at the moment. The design looks futuristic, almost like a rocket or the twin rudders on the back of an airplane. On TV, people are watching popular shows such as "The Lone Ranger", "The Gene Autry Show", "The Cisco Kid" and "The Jack Benny Program". Kids and teenagers are watching TV shows such as "Looney Tunes", "Adventures of Superman", "Winky Dink and You" and "Captain Kangaroo".

If you're a kid or a teenager, then you're probably playing with toys such as Foto-Electric Baseball, Pitchin' Pal, Mr. Potato Head and Matchbox toy cars.

These are trending news stories and fads that were prevalent at this time. These are topics that would have been in the media on November 27th, 1955.

News stories and other events that happened around November 27th, 1955.

Check out our personality summary for people who were born on November 27th, 1955.

Television shows that people were watching in November, 1955.

If you are looking for some childhood nostalgia, then you should check out November 27th, 1961 instead.

Wrestler. Deceased
Born on November 27th, 1962
He was born exactly 7 years after this date.

South Korean rapper.
Born on November 27th, 1992
He was born exactly 37 years after this date.

Dwight David Eisenhower was the President of the United States on November 27th, 1955.

Sir Anthony Eden was the Prime Minister of the United Kingdom on November 27th, 1955.

Find out what your age was on November 27th, 1955, by entering your DOB below.
This information is not saved on our server.

Here are some fun statistics about November 27th, 1955.