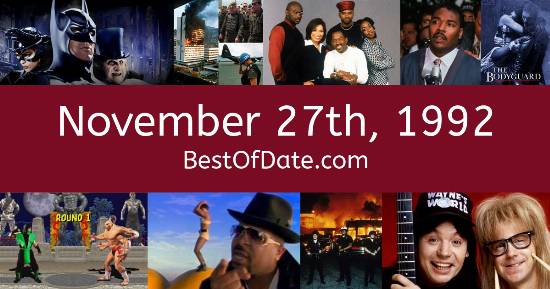 On November 27th, 1992, the following songs were at the top of the music charts in the USA and the UK.

The top "Box Office" movie on this date was the film "Bram Stoker's Dracula".

The date is November 27th, 1992, and it's a Friday. Anyone born today will have the star sign Sagittarius. Currently, people have "that Friday feeling" and are looking forward to the weekend.

It is Black Friday in the United States - a day that many consider to be the start of the Christmas shopping season. It's November, so the evenings are getting darker and the days are getting colder. In America, the song I Will Always Love You by Whitney Houston is on top of the singles charts.

Over in the UK, Would I Lie To You by Charles & Eddie is the number one hit song. George W. Bush Snr. is currently the President of the United States, and the movie Bram Stoker's Dracula is at the top of the Box Office. In the United Kingdom, John Major is the current Prime Minister.

In fashion, many of the trends from the late 80s are still in vogue. Colored tights, denim overalls, leotards, flannel shirts and shoulder pads are all fashionable at the moment. Grunge fashion has also become mainstream, popularizing band t-shirts, ripped jeans, mom jeans and Doc Martens. In Europe, a war is continuing to rage on in Bosnia and Herzegovina. In music, singer Whitney Houston has recently released her new soundtrack album "The Bodyguard". The album contains songs such as "I Will Always Love You" and "I'm Every Woman".

Disney's "Aladdin" and "The Bodyguard", starring Whitney Houston and Kevin Costner, have both been released in movie theaters. Meanwhile, the film "Home Alone 2: Lost in New York" is also showing on the big screen. In Europe, the Federal Assembly in Czechoslovakia has recently voted to split the country into the Czech Republic and Slovakia. The change will take effect on the 1st of January of next year. In soccer, French striker Eric Cantona has joined Manchester United from Leeds in a transfer that is worth £1.2 million.

If you were to travel back to this day, notable figures such as Audrey Hepburn, Thurgood Marshall, Andre the Giant and Bobby Moore would all be still alive. On TV, people are watching popular shows such as "Last of the Summer Wine", "Murder, She Wrote", "Step by Step" and "Baywatch". Meanwhile, gamers are playing titles such as "Civilization", "Road Rash II", "Super Mario Kart" and "Super Star Wars".

Kids and teenagers are watching TV shows such as "The Simpsons", "Dinosaurs", "The Adventures of Tintin" and "Goof Troop". If you're a kid or a teenager, then you're probably playing with toys such as Mr Frosty, Koosh Ball, the Game Boy and Yo-yo.

These are trending news stories and fads that were prevalent at this time. These are topics that would have been in the media on November 27th, 1992.

News stories and other events that happened around November 27th, 1992.

Check out our personality summary for people who were born on November 27th, 1992.

Television shows that people were watching in November, 1992.

Popular video games that people were playing in November of 1992.

If you are looking for some childhood nostalgia, then you should check out November 27th, 1998 instead.

George W. Bush Snr. was the President of the United States on November 27th, 1992.

John Major was the Prime Minister of the United Kingdom on November 27th, 1992.

Find out what your age was on November 27th, 1992, by entering your DOB below.
This information is not saved on our server.

Here are some fun statistics about November 27th, 1992.