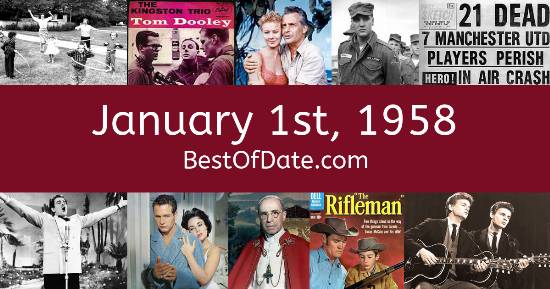 The best-selling single on January 1st, 1958 was "April Love" by Pat Boone.

The date is January 1st, 1958, and it's a Wednesday. Anyone born today will have the star sign Capricorn. It's New Years Day, the official start of the year 1958. A lot of people are relaxing at home. Others are nursing hangovers from the night before.

In music, the song "April Love" by Pat Boone is the best-selling record at the moment. Dwight David Eisenhower is currently the President of the United States, and Harold Macmillan is the Prime Minister of the United Kingdom. In fashion, women are sporting chemise dresses, sheaths, sack dresses and straight-cut suits. Short boxy jackets and shift dresses are also beginning to become popular. Meanwhile, a lot of men are sporting a "Teddy Boy" style that involves leather jackets, greased-back hair, extremely narrow trousers and velvet-collared jackets. Men are also wearing formal suits as daywear.

On TV, people are watching popular shows such as "You Bet Your Life", "The Danny Thomas Show", "Wagon Train" and "Casey Jones". Kids and teenagers are watching TV shows such as "Looney Tunes", "Mighty Mouse Playhouse", "The Gumby Show" and "Colonel Bleep". If you're a kid or a teenager, then you're probably playing with toys such as Tonka trucks, Tiny Tears (doll), BAS-KET Miniature Basketball and Wooly Willy.

These are trending news stories and fads that were prevalent at this time. These are topics that would have been in the media on January 1st, 1958.

News stories and other events that happened around January 1st, 1958.

Check out our personality summary for people who were born on January 1st, 1958.

Television shows that people were watching in January, 1958.

If you are looking for some childhood nostalgia, then you should check out January 1st, 1964 instead.

Actor. Deceased
Born on January 1st, 1969
He was born exactly 11 years after this date.

Dwight David Eisenhower was the President of the United States on January 1st, 1958.

Find out what your age was on January 1st, 1958, by entering your DOB below.
This information is not saved on our server.

Here are some fun statistics about January 1st, 1958.