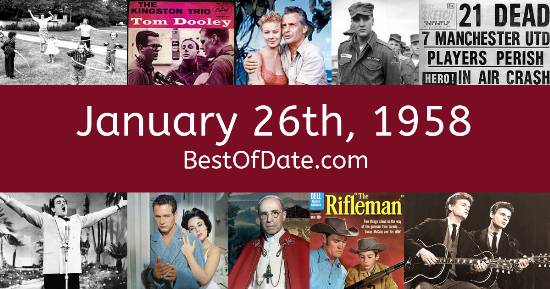 The date is January 26th, 1958 and it's a Sunday. Anyone born today will have the star sign Aquarius. Currently, people are enjoying their weekend.

In music, the song "At the Hop" by Danny & The Juniors is the best-selling record at the moment. Dwight David Eisenhower is currently the President of the United States and Harold Macmillan is the Prime Minister of the United Kingdom. In fashion, women are sporting chemise dresses, sheaths, sack dresses and straight-cut suits. Short boxy jackets and shift dresses are also beginning to become popular. Meanwhile, a lot of men are sporting a "Teddy Boy" style that involves leather jackets, greased-back hair, extremely narrow trousers and velvet-collared jackets. Men are also wearing formal suits as daywear.

On TV, people are watching popular shows such as "What's My Line?", "The Jack Benny Program", "Maverick" and "Casey Jones". Kids and teenagers are watching TV shows such as "Tom and Jerry", "Adventures of Superman", "Captain Kangaroo" and "The Gumby Show". Popular toys at the moment include the likes of Dimestore soldiers, Foto-Electric Baseball, Play-Doh and the Frisbee.

If you are looking for some childhood nostalgia, then check out January 26th, 1964 instead.

Hockey player.
Born on January 26th, 1961
He was born exactly 3 years after this date.

Soccer manager.
Born on January 26th, 1963
He was born exactly 5 years after this date.

Soccer manager.
Born on January 26th, 1973
He was born exactly 15 years after this date.

Dwight David Eisenhower was the President of the United States on January 26th, 1958.

Harold Macmillan was the Prime Minister of the United Kingdom on January 26th, 1958.

Enter your date of birth below to find out how old you were on January 26th, 1958.

Here are some fun statistics about January 26th, 1958.