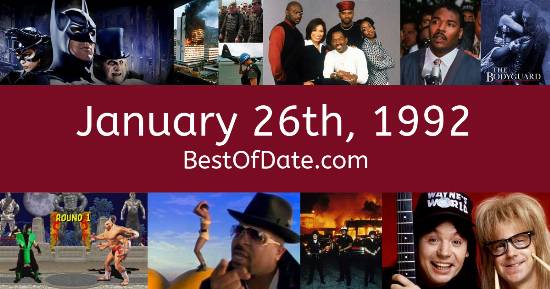 Songs that were on top of the music singles charts in the USA and the United Kingdom on January 26th, 1992.

The date is January 26th, 1992 and it's a Sunday. Anyone born today will have the star sign Aquarius. Currently, people are enjoying their weekend.

In America, the song All 4 Love by Color Me Badd is on top of the singles charts. Over in the UK, Goodnight Girl by Wet Wet Wet is the number one hit song. George W. Bush Snr. is currently the President of the United States and the movie Hook is at the top of the Box Office.

A civil war is currently taking place in the African country of Rwanda. It's 1992, so radio stations are being dominated by the likes of Kris Kross, Boyz II Men, Whitney Houston, Sir Mix-a-Lot, Right Said Fred, Snap! and Nirvana. In France, 87 people have tragically lost their lives after Air Inter Flight 148 crashed into a mountain near Strasbourg.

The Washington Redskins have just won Super Bowl XXVI after defeating the Buffalo Bills by 37-24 at the Metrodome in Minneapolis, Minnesota. Following the recent breakup of the Soviet Union, Russian president Boris Yeltsin and US president George H. W. Bush have announced that they will both stop aiming nuclear weapons at one another. If you were to travel back to this day, notable figures such as Robert Reed, Anthony Perkins, Audrey Hepburn and Thurgood Marshall would all be still alive.

On TV, people are watching popular shows such as "Knots Landing", "Matlock", "Married... with Children" and "In the Heat of the Night". Meanwhile, gamers are playing titles such as "Paperboy", "Battletoads", "Sonic the Hedgehog" and "Super Castlevania IV". Kids and teenagers are watching TV shows such as "In Living Color", "Rosie and Jim", "The Fresh Prince of Bel-Air" and "The Ren & Stimpy Show".

Popular toys at the moment include the likes of Screwball Scramble, Pogo ball / Lolo ball, Koosh Ball and Yo-yo.

If you are looking for some childhood nostalgia, then check out January 26th, 1998 instead.

George W. Bush Snr. was the President of the United States on January 26th, 1992.

John Major was the Prime Minister of the United Kingdom on January 26th, 1992.

Enter your date of birth below to find out how old you were on January 26th, 1992.

Here are some fun statistics about January 26th, 1992.