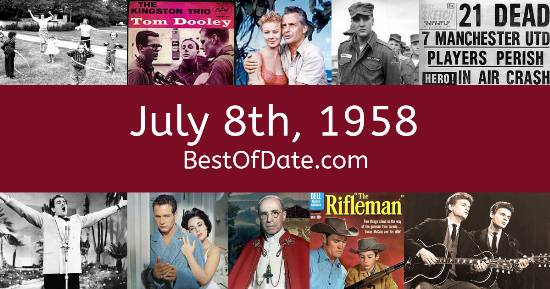 The best-selling single on July 8th, 1958 was "The Purple People Eater" by Sheb Wooley.

The date is July 8th, 1958, and it's a Tuesday. Anyone born today will have the star sign Cancer. It's summer, so the temperatures are warmer and the evenings are longer than usual.

In music, the song "The Purple People Eater" by Sheb Wooley is the best-selling record at the moment. Dwight David Eisenhower is currently the President of the United States, and Harold Macmillan is the Prime Minister of the United Kingdom. In fashion, women are sporting chemise dresses, sheaths, sack dresses and straight-cut suits. Short boxy jackets and shift dresses are also beginning to become popular. Meanwhile, a lot of men are sporting a "Teddy Boy" style that involves leather jackets, greased-back hair, extremely narrow trousers and velvet-collared jackets. Men are also wearing formal suits as daywear.

Tailfins on cars are extremely popular at the moment. The design looks futuristic, almost like a rocket or the twin rudders on the back of an airplane. It's 1958, so radio stations and jukeboxes are playing songs from singers such as Domenico Modugno, The Everly Brothers, Elvis Presley, David Seville, Perez Prado, Billy Vaughn, Perry Como and The Champs. A new plastic toy called the "Hula Hoop" has become the latest fad. The hoop, which can be twirled around your waist and limbs, has exploded in popularity since July.

If you were to travel back to this day, notable figures such as Buddy Holly would be still alive. On TV, people are watching popular shows such as "The George Burns and Gracie Allen Show", "Sky King", "The Danny Thomas Show" and "Perry Mason". Children and teenagers are currently watching television shows such as "Father Knows Best", "Heckle and Jeckle", "Captain Pugwash" and "Leave It to Beaver".

If you're a kid or a teenager, then you're probably playing with toys such as Dimestore soldiers, Foto-Electric Baseball, Matchbox toy cars and the Hula Hoop.

These are trending news stories and fads that were prevalent at this time. These are topics that would have been in the media on July 8th, 1958.

Check out our personality summary for people who were born on July 8th, 1958.

Television shows that people were watching in July, 1958.

If you are looking for some childhood nostalgia, then you should check out July 8th, 1964 instead.

Youtuber. Deceased
Born on July 8th, 1984
He was born exactly 26 years after this date.

Love Island contestant.
Born on July 8th, 1998
She was born exactly 40 years after this date.

Dwight David Eisenhower was the President of the United States on July 8th, 1958.

Enter your date of birth below to find out how old you were on July 8th, 1958.
This information is not transmitted to our server.

Here are some fun statistics about July 8th, 1958.