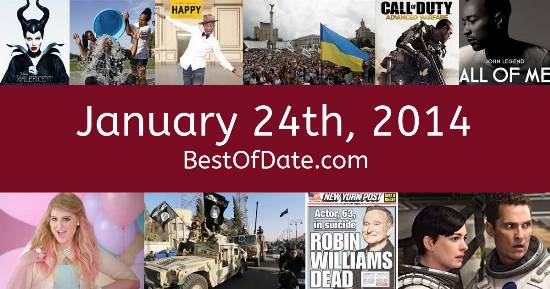 On January 24th, 2014, the following songs were at the top of the music charts in the USA and the UK.

The top "Box Office" movie on this date was the film "Lone Survivor".

The date is January 24th, 2014, and it's a Friday. Anyone born today will have the star sign Aquarius. Currently, people have "that Friday feeling" and are looking forward to the weekend.

In America, the song Timber by Pitbull featuring Kesha is on top of the singles charts. Over in the UK, Happy by Pharrell Williams is the number one hit song. Barack Obama is currently the President of the United States, and the movie Lone Survivor is at the top of the Box Office.

Justin Bieber is in the news after being arrested on suspicion of drink driving in Miami Beach. In soccer, Chelsea player Juan Mata has recently transferred to Manchester United. If you were to travel back to this day, notable figures such as Philip Seymour Hoffman, Viscera, Peaches Geldof and The Ultimate Warrior would all be still alive.

On TV, people are watching popular shows such as "Two and a Half Men", "Grey's Anatomy", "Sons of Anarchy" and "Glee". Meanwhile, gamers are playing titles such as "Saints Row IV", "Call of Duty: Ghosts", "Rust" and "DayZ". Children and teenagers are currently watching television shows such as "LazyTown", "Glee", "Dog with a Blog" and "Sheriff Callie's Wild West".

If you're a kid or a teenager, then you're probably playing with toys such as Rainbow Loom, the Furby Boom, the Xbox One and Frozen dolls.

These are trending news stories and fads that were prevalent at this time. These are topics that would have been in the media on January 24th, 2014.

Check out our personality summary for people who were born on January 24th, 2014.

If you are looking for some childhood nostalgia, then you should check out January 24th, 2020, instead.

Barack Obama was the President of the United States on January 24th, 2014.

Enter your date of birth below to find out how old you were on January 24th, 2014.
This information is not transmitted to our server.

Here are some fun statistics about January 24th, 2014.