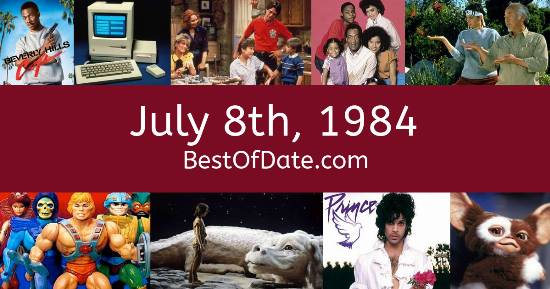 These songs were on top of the music charts in the United States and the United Kingdom on July 8th, 1984.

The date is July 8th, 1984, and it's a Sunday. Anyone born today will have the star sign Cancer. Currently, people are enjoying their weekend.

It's summer, so the temperatures are warmer and the evenings are longer than usual. In America, the song When Doves Cry by Prince is on top of the singles charts. Over in the UK, Two Tribes by Frankie goes to Hollywood is the number one hit song.

Because it's 1984, the radio stations are being dominated by artists such as George Michael, Stevie Wonder, Wham!, Cyndi Lauper and Frankie Goes to Hollywood. If you were to travel back to this day, notable figures such as Truman Capote, Kiki Camarena, David Huffman and Rock Hudson would all be still alive. On TV, people are watching popular shows such as "The Jeffersons", "The Facts of Life", "Only Fools and Horses" and "Cheers".

Meanwhile, gamers are playing titles such as "Asteroids", "Pac-Man", "Mario Bros." and "Duck Hunt". Children and teenagers are currently watching television shows such as "The Bugs Bunny Show", "Mister Rogers' Neighborhood", "Happy Days" and "Diff'rent Strokes". If you're a kid or a teenager, then you're probably playing with toys such as the Easy-Bake Oven, Speak & Spell, Monchhichi / Chicaboo and the Commodore 64.

These are trending news stories and fads that were prevalent at this time. These are topics that would have been in the media on July 8th, 1984.

Check out our personality summary for people who were born on July 8th, 1984.

Television shows that people were watching in July, 1984.

Popular video games that people were playing in July of 1984.

If you are looking for some childhood nostalgia, then you should check out July 8th, 1990, instead.

Celebrities, historical figures, and other notable people who were born on July 8th.

Soccer player.
Born on July 8th, 1991
He was born exactly 7 years after this date.

Love Island contestant.
Born on July 8th, 1998
She was born exactly 14 years after this date.

Ronald Reagan was the President of the United States on July 8th, 1984.

Enter your date of birth below to find out how old you were on July 8th, 1984.
This information is not transmitted to our server.

Here are some fun statistics about July 8th, 1984.