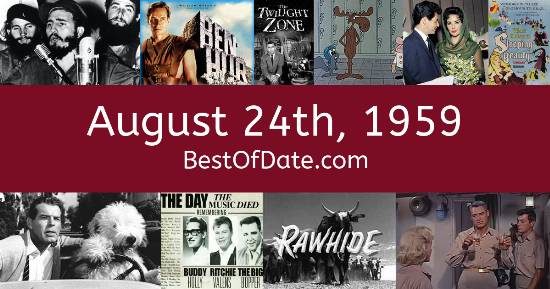 August 24th, 1959 relates to an event in a movie, book, game or television series:

The date is August 24th, 1959 and it's a Monday. Anyone born today will have the star sign Virgo. The summer of 1959 is coming to an end and fall is just around the corner.

In music, the song "The Three Bells" by The Browns is the best-selling record at the moment. Dwight David Eisenhower is currently the President of the United States and Harold Macmillan is the Prime Minister of the United Kingdom. In fashion, women are sporting chemise dresses, sheaths, sack dresses and straight-cut suits. Short boxy jackets and shift dresses are also beginning to become popular. Meanwhile, a lot of men are sporting a "Teddy Boy" style that involves leather jackets, greased-back hair, extremely narrow trousers and velvet-collared jackets. Men are also wearing formal suits as daywear.

Tailfins on cars are extremely popular at the moment. The design looks futuristic, almost like a rocket or the twin rudders on the back of an airplane. It's 1959, so radio stations and jukeboxes are playing hit songs from artists such as Johnny Horton, Bobby Darin, Lloyd Price, Frankie Avalon, Paul Anka, The Browns, The Fleetwoods and Wilbert Harrison. On TV, people are watching popular shows such as "What's My Line?", "Gunsmoke", "Have Gun - Will Travel" and "Wagon Train".

Kids and teenagers are watching TV shows such as "Looney Tunes", "Crusader Rabbit", "Heckle and Jeckle" and "Leave It to Beaver". Popular toys include the likes of "Crater Critters".

Children's and Teen TV shows that would have been airing on this date in 1959.

Toys and games that would have been popular on this date in 1959:

Who was the Prime Minister of the United Kingdom on August 24th, 1959?

Enter your date of birth below to find out how old you were on August 24th, 1959.

Looking for some nostalgia? Here are some Youtube videos relating to August 24th, 1959. Please note that videos are automatically selected by Youtube and that results may vary! Click on the "Load Next Video" button to view the next video in the search playlist. In many cases, you'll find episodes of old TV shows, documentaries, music videos and soap dramas.