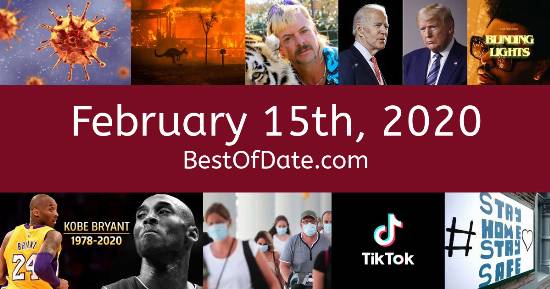 Songs that were on top of the music singles charts in the USA and the United Kingdom on February 15th, 2020.

American serial killer. Deceased
Born on February 15th, 1939
He was not alive on this date.

Actor. Deceased
Born on February 15th, 1964
He was not alive on this date.

Donald Trump was the President of the United States on February 15th, 2020.

Boris Johnson was the Prime Minister of the United Kingdom on February 15th, 2020.

Enter your date of birth below to find out how old you were on February 15th, 2020.

Here are some fun statistics about February 15th, 2020.