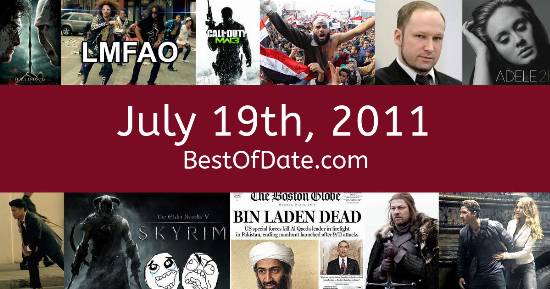 Songs that were on top of the music singles charts in the USA and the United Kingdom on July 19th, 2011:

The date is July 19th, 2011 and it's a Tuesday. Anyone born today will have the star sign Cancer. It's summer, so the temperatures are warmer and the evenings are longer than usual.

In America, the song Party Rock Anthem by LMFAO is on top of the singles charts. Over in the UK, Glad You Came by The Wanted is the number one hit song. Barack Obama is currently the President of the United States and the movie Harry Potter and the Deathly Hallows: Part 2 is at the top of the Box Office.

It's 2011, so the music charts are being dominated by artists such as Adele, LMFAO, Katy Perry and Bruno Mars. Anti-government protests are currently taking place in cities across Syria. A civil war is raging on in Libya. Large battles are taking place between Colonel Gaddafi's government forces and Libyan rebels, who are being supported by NATO.

A fad called "planking", which involves a person lying face down in an unusual location, is popular at the moment. A blackhat hacking group called "LulzSec" are currently in the news following a number of high profile attacks on companies such as Sony. An Advice Animal meme called "Good Guy Greg" is beginning to take off in popularity.

Google have just launched their new social network "Google+" and people are wondering if it can challenge Facebook for the top spot. Ireland's economic woes are continuing following Moody's recent decision to downgrade the country's debt status to "Junk". On TV, people are watching popular shows such as "CSI: Miami", "One Tree Hill", "Real Housewives of New York City" and "Glee".

Meanwhile, gamers are playing titles such as "Farmville", "StarCraft II: Wings of Liberty", "Homefront" and "Terraria". Children and teenagers are currently watching television shows such as "One Tree Hill", "Mickey Mouse Clubhouse", "Team Umizoomi" and "Good Luck Charlie". If you're a kid or a teenager, then you're probably playing with toys such as "Xbox 360", "PlayStation 3" and "iPad".

Who was the Prime Minister of the United Kingdom on July 19th, 2011?

Looking for some nostalgia? Here are some Youtube videos relating to July 19th, 2011. Please note that videos are automatically selected by Youtube and that results may vary! Click on the "Load Next Video" button to view the next video in the search playlist. In many cases, you'll find episodes of old TV shows, documentaries, music videos and soap dramas.