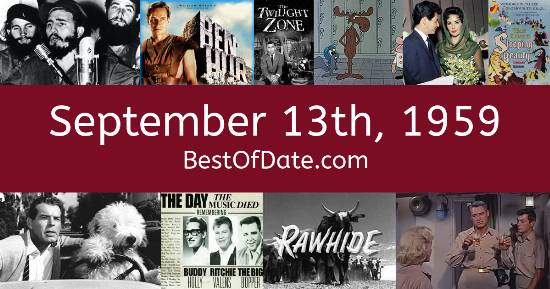 The best-selling single on September 13th, 1959 was "The Three Bells" by The Browns.

The movie "North by Northwest" was at the top of the Box Office on this day.

The date is September 13th, 1959, and it's a Sunday. Anyone born today will have the star sign Virgo. Currently, people are enjoying their weekend.

Schools and colleges are starting again and Autumn has officially arrived. As a result, temperatures are beginning to cool and trees are starting to shed their leaves. In music, the song "The Three Bells" by The Browns is the best-selling record at the moment. Dwight David Eisenhower is currently the President of the United States, and the movie North by Northwest is at the top of the Box Office.

It's 1959, so radio stations and jukeboxes are playing hit songs from artists such as Johnny Horton, Bobby Darin, Lloyd Price, Frankie Avalon, Paul Anka, The Browns, The Fleetwoods and Wilbert Harrison. If you were to travel back to this day, notable figures such as Clark Gable would be still alive. On TV, people are watching popular shows such as "The Danny Thomas Show", "Fury", "Have Gun - Will Travel" and "Rawhide".

Kids and teenagers are watching TV shows such as "Crusader Rabbit", "Mighty Mouse Playhouse", "Bozo: The World's Most Famous Clown" and "Noggin the Nog". Popular toys at the moment include the likes of Spinning Tops, Tiny Tears (doll), Wooly Willy and the Frisbee.

These are trending news stories and fads that were prevalent at this time. These are topics that would have been in the media on September 13th, 1959.

News stories and other events that happened around September 13th, 1959.

Check out our personality summary for people who were born on September 13th, 1959.

Television shows that people were watching in September, 1959.

If you are looking for some childhood nostalgia, then you should check out September 13th, 1965 instead.

Brazilian Youtube personality.
Born on September 13th, 1988
He was born exactly 29 years after this date.

Dwight David Eisenhower was the President of the United States on September 13th, 1959.

Harold Macmillan was the Prime Minister of the United Kingdom on September 13th, 1959.

Find out what your age was on September 13th, 1959, by entering your DOB below.
This information is not saved on our server.

Here are some fun statistics about September 13th, 1959.