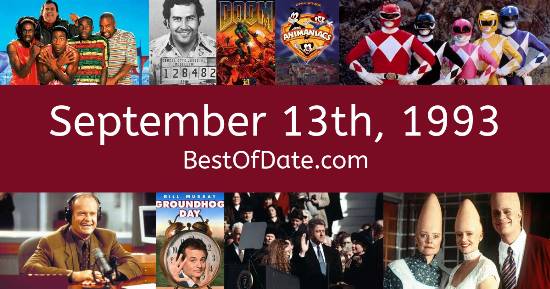 These songs were on top of the music charts in the United States and the United Kingdom on September 13th, 1993.

The movie "The Fugitive" was at the top of the Box Office on this day.

The date is September 13th, 1993, and it's a Monday. Anyone born today will have the star sign Virgo. Schools and colleges are starting again and Autumn has officially arrived. As a result, temperatures are beginning to cool and trees are starting to shed their leaves.

In America, the song Dream Lover by Mariah Carey is on top of the singles charts. Over in the UK, Mr. Vain by Culture Beat is the number one hit song. Bill Clinton is currently the President of the United States, and the movie The Fugitive is at the top of the Box Office.

It's 1993, so radio stations are being dominated by the likes of Meat Loaf, UB40, Snow, Haddaway, Whitney Houston, Take That, Janet Jackson and Mariah Carey. In television news, a new children's show called the "Mighty Morphin Power Rangers" has recently made its debut. A new film called "True Romance", starring Christian Slater and Patricia Arquette, has recently been released in movie theaters.

Meanwhile, a new sci-fi series called "The X-Files" has been aired on television for the first time. The show follows FBI agents Mulder and Scully as they investigate the paranormal. Grunge band "Nirvana" have released their new album "In Utero". This is their third studio album and it contains songs such as "Heart-Shaped Box" and "All Apologies". A new animated series called "Animaniacs" has made its TV debut on Fox Kids. The show consists of multiple characters and mini episodes.

Following the signing of the Oslo I Accord, footage of PLO leader Yasser Arafat and Israeli prime minister Yitzhak Rabin shaking hands in Washington is being broadcast on all major news stations. The scenes bring hope that the Israeli-Palestinian conflict will come to an end. A controversial fighting game called "Mortal Kombat" has just been released on the SNES and the SEGA Genesis. The game has received criticism because of its blood and gore. If you were to travel back to this day, notable figures such as Vincent Price, River Phoenix, Frank Zappa and Bill Hicks would all be still alive.

If you're a kid or a teenager, then you're probably playing with toys such as the Game Boy, the SEGA Game Gear, Nerf Blaster and Action Man.

These are trending news stories and fads that were prevalent at this time. These are topics that would have been in the media on September 13th, 1993.

News stories, pop culture trends, and other events that happened around September 13th, 1993.

Check out our personality summary for people who were born on September 13th, 1993.

Television shows that people were watching in September, 1993.

Popular video games that people were playing in September of 1993.

If you are looking for some childhood nostalgia, then you should check out September 13th, 1999, instead.

Celebrities, historical figures, and other notable people who were born on September 13th.

Rapper.
Born on September 13th, 1996
He was born exactly 3 years after this date.

Bill Clinton was the President of the United States on September 13th, 1993.

Find out what your age was on September 13th, 1993, by entering your DOB below.
This information is not saved on our server.

Here are some fun statistics about September 13th, 1993.