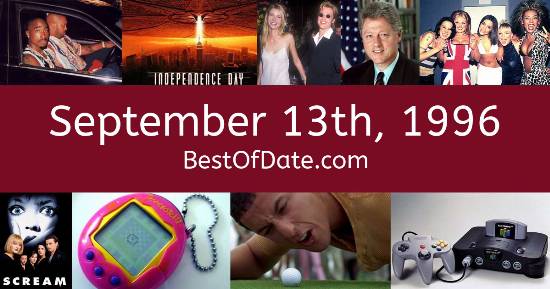 These songs were on top of the music charts in the United States and the United Kingdom on September 13th, 1996.

The movie "Maximum Risk" was at the top of the Box Office on this day.

The date is September 13th, 1996, and it's a Friday. Anyone born today will have the star sign Virgo. Currently, people have "that Friday feeling" and are looking forward to the weekend.

Schools and colleges are starting again and Autumn has officially arrived. As a result, temperatures are beginning to cool and trees are starting to shed their leaves. In America, the song Macarena by Los Del Rio is on top of the singles charts. Over in the UK, Flava by Peter Andre is the number one hit song.

Bill Clinton is currently the President of the United States, and the movie Maximum Risk is at the top of the Box Office. In the United Kingdom, John Major is the current Prime Minister. A new form of communication called "text messaging" is continuing to grow in popularity. However, it can only be done if both the sender and the receiver are on the same cell network.

The world is in shock following the recent murder of rap star Tupac Shakur. If you were to travel back to this day, notable figures such as Tupac Shakur, Yaki Kadafi, Tiny Tim and Carl Sagan would all be still alive. On TV, people are watching popular shows such as "One Foot in the Grave", "Melrose Place", "Lois & Clark: The New Adventures of Superman" and "Everybody Loves Raymond".

These are trending news stories and fads that were prevalent at this time. These are topics that would have been in the media on September 13th, 1996.

News stories and other events that happened around September 13th, 1996.

Check out our personality summary for people who were born on September 13th, 1996.

Television shows that people were watching in September, 1996.

Popular video games that people were playing in September of 1996.

If you are looking for some childhood nostalgia, then you should check out September 13th, 2002 instead.

Bill Clinton was the President of the United States on September 13th, 1996.

John Major was the Prime Minister of the United Kingdom on September 13th, 1996.

Find out what your age was on September 13th, 1996, by entering your DOB below.
This information is not saved on our server.

Here are some fun statistics about September 13th, 1996.