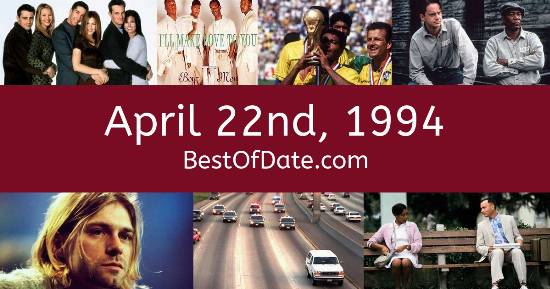 These songs were on top of the music charts in the United States and the United Kingdom on April 22nd, 1994.

The top "Box Office" movie on this date was the film "Bad Girls".

The date is April 22nd, 1994, and it's a Friday. Anyone born today will have the star sign Taurus. Currently, people have "that Friday feeling" and are looking forward to the weekend.

The summer of 1994 is drawing closer and temperatures have started to rise. In America, the song Bump N' Grind by R. Kelly is on top of the singles charts. Over in the UK, Everything Changes by Take That is the number one hit song.

Bill Clinton is currently the President of the United States, and the movie Bad Girls is at the top of the Box Office. In the United Kingdom, John Major is the current Prime Minister. Meanwhile, in technology news, a relatively new storage format called the CD is beginning to outpace the regular cassette tape in music sales. The disc-based format gives listeners the ability to skip between songs instead of having to manually rewind and forward.

In music news, American punk rock band The Offspring have released their new album "Smash". Meanwhile, actress Roseanne Barr has filed for divorce from Tom Arnold after four years of marriage. In South Africa, the country has adopted its new national flag.

Former U.S. President Richard Nixon has passed away four days after suffering from a stroke. He was 81 years old. If you were to travel back to this day, notable figures such as Richard Nixon, Nicole Brown Simpson, Andrés Escobar and Raul Julia would all be still alive. On TV, people are watching popular shows such as "Last of the Summer Wine", "Dinosaurs", "Step by Step" and "Ellen".

Meanwhile, gamers are playing titles such as "X-Men", "Tiny Toon Adventures 2: Trouble in Wackyland", "Gunstar Heroes" and "Myst". Children and teenagers are currently watching television shows such as "Thomas the Tank Engine", "Fireman Sam", "Roseanne" and "Bill Nye the Science Guy". Popular toys at the moment include the likes of Screwball Scramble, the SEGA Game Gear, the Talkboy and Action Man.

These are trending news stories and fads that were prevalent at this time. These are topics that would have been in the media on April 22nd, 1994.

Check out our personality summary for people who were born on April 22nd, 1994.

Television shows that people were watching in April, 1994.

Popular video games that people were playing in April of 1994.

If you are looking for some childhood nostalgia, then you should check out April 22nd, 2000 instead.

Bill Clinton was the President of the United States on April 22nd, 1994.

John Major was the Prime Minister of the United Kingdom on April 22nd, 1994.

Enter your date of birth below to find out how old you were on April 22nd, 1994.
This information is not transmitted to our server.