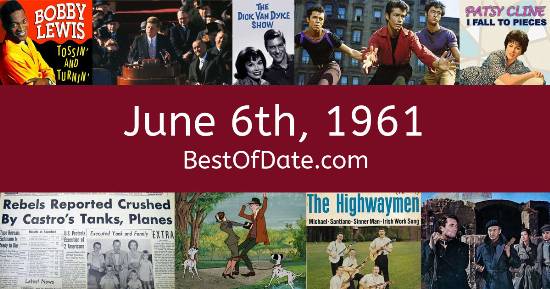 Songs that were on top of the music singles charts in the USA and the United Kingdom on June 6th, 1961.

The date is June 6th, 1961 and it's a Tuesday. Anyone born today will have the star sign Gemini. It's summer, so the temperatures are warmer and the evenings are longer than usual.

In America, the song Running Scared by Roy Orbison is on top of the singles charts. Over in the UK, Surrender by Elvis Presley is the number one hit song. John Fitzgerald Kennedy is currently the President of the United States and the movie The Young Savages is at the top of the Box Office.

Because it's 1961, radio stations are playing hit songs from artists such as Bert Kaempfert, Chubby Checker, Elvis Presley, Del Shannon, Bobby Lewis and Jimmy Dean. If you were to travel back to this day, notable figures such as Ernest Hemingway and Marilyn Monroe would be still alive. On TV, people are watching popular shows such as "You Bet Your Life", "Maverick", "The Twilight Zone" and "The Untouchables".

Children and teenagers are currently watching television shows such as "Captain Kangaroo", "Mighty Mouse Playhouse", "The Adventures of Rocky and Bullwinkle and Friends" and "My Three Sons". Popular toys at the moment include the likes of Wooly Willy, the Frisbee, the Hula Hoop and Barbie.

If you are looking for some childhood nostalgia, then check out June 6th, 1967 instead.

Child actress. Deceased
Born on June 6th, 1978
She was born exactly 17 years after this date.

Youtube personality.
Born on June 6th, 1990
He was born exactly 29 years after this date.

John Fitzgerald Kennedy was the President of the United States on June 6th, 1961.

Harold Macmillan was the Prime Minister of the United Kingdom on June 6th, 1961.

Enter your date of birth below to find out how old you were on June 6th, 1961.

Here are some fun statistics about June 6th, 1961.