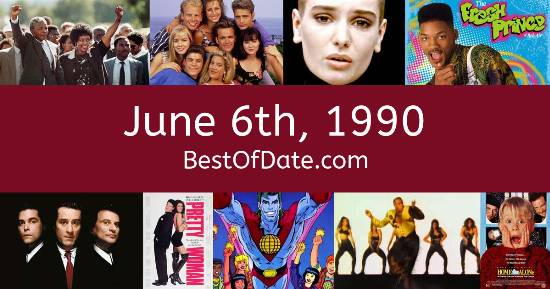 These songs were on top of the music charts in the United States and the United Kingdom on June 6th, 1990.

The date is June 6th, 1990, and it's a Wednesday. Anyone born today will have the star sign Gemini. It's summer, so the temperatures are warmer and the evenings are longer than usual.

In America, the song Hold On by Wilson Phillips is on top of the singles charts. Over in the UK, World In Motion by England / New Order is the number one hit song. George W. Bush Snr. is currently the President of the United States, and the movie Total Recall is at the top of the Box Office.

It's 1990, so the airwaves are being dominated by music artists such as Sinéad O'Connor, Paula Abdul, Janet Jackson, Vanilla Ice, Mariah Carey, Stevie B, Madonna and MC Hammer. In Europe, Boris Yeltsin has just been elected as the first ever elected president of the Russian Soviet Federative Socialist Republic. If you were to travel back to this day, notable figures such as Stevie Ray Vaughan, Roald Dahl, John Bardeen and Miles Davis would all be still alive.

On TV, people are watching popular shows such as "Who's the Boss?", "Married... with Children", "Full House" and "Quantum Leap". Meanwhile, gamers are playing titles such as "Gain Ground", "RoboCop", "Castlevania III: Dracula's Curse" and "Batman: The Video Game". Children and teenagers are currently watching television shows such as "Growing Pains", "Pingu", "Full House" and "Chip 'n' Dale's Rescue Rangers".

Popular toys at the moment include the likes of Sylvanian Families, the Nintendo Entertainment System, Jenga and the Game Boy.

These are trending news stories and fads that were prevalent at this time. These are topics that would have been in the media on June 6th, 1990.

Check out our personality summary for people who were born on June 6th, 1990.

If you are looking for some childhood nostalgia, then you should check out June 6th, 1996, instead.

Celebrities, historical figures, and other notable people who were born on June 6th.

George W. Bush Snr. was the President of the United States on June 6th, 1990.

Enter your date of birth below to find out how old you were on June 6th, 1990.
This information is not transmitted to our server.

Here are some fun statistics about June 6th, 1990.