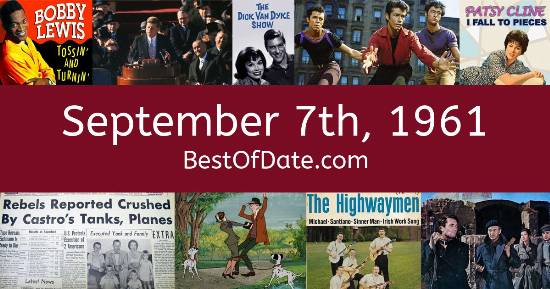 Songs that were on top of the music singles charts in the USA and the United Kingdom on September 7th, 1961.

The date is September 7th, 1961 and it's a Thursday. Anyone born today will have the star sign Virgo. Schools have started back and autumn has arrived, so temperatures have started to cool and trees are beginning to shed their leaves.

In America, the song Michael by Highwaymen is on top of the singles charts. Over in the UK, Johnny Remember Me by John Leyton is the number one hit song. John Fitzgerald Kennedy is currently the President of the United States and Harold Macmillan is the Prime Minister of the United Kingdom.

On TV, people are watching popular shows such as "What's My Line?", "The Danny Thomas Show", "Danger Man" and "The Andy Griffith Show". Children and teenagers are currently watching television shows such as "Captain Kangaroo", "The Huckleberry Hound Show", "The Many Loves of Dobie Gillis" and "Mister Ed". If you're a kid or a teenager, then you're probably playing with toys such as Crater Critters, Troll doll, Astrobase and Etch A Sketch.

John Fitzgerald Kennedy was the President of the United States on September 7th, 1961.

Harold Macmillan was the Prime Minister of the United Kingdom on September 7th, 1961.

Enter your date of birth below to find out how old you were on September 7th, 1961.

Here are some fun statistics about September 7th, 1961.

Leave a comment and tell everyone why September 7th, 1961 is important to you.