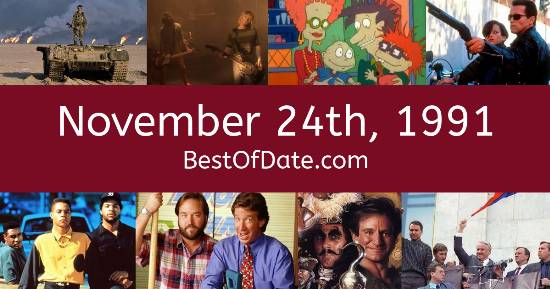 On November 24th, 1991, the following songs were at the top of the music charts in the USA and the UK.

The top "Box Office" movie on this date was the film "Cape Fear".

The date is November 24th, 1991, and it's a Sunday. Anyone born today will have the star sign Sagittarius. Currently, people are enjoying their weekend.

In America, Thanksgiven Day of 1991 is just around the corner. It's November, so the evenings are getting darker and the days are getting colder. In America, the song When A Man Loves A Woman by Michael Bolton is on top of the singles charts.

Over in the UK, Black Or White by Michael Jackson is the number one hit song. George W. Bush Snr. is currently the President of the United States, and the movie Cape Fear is at the top of the Box Office. In the United Kingdom, John Major is the current Prime Minister.

It's 1991, so the airwaves are being dominated by artists such as Bryan Adams, Michael Jackson, Roxette, R.E.M., Color Me Badd and Paula Abdul. A rock subgenre called "Grunge" is starting to rise in popularity. In Europe, the Soviet Union is continuing to dissolve. The Communist Party has just been officially banned from Russia by a presidential decree.

Yugoslav forces have just captured the Croatian town of Vukovar following an 87-day battle. Irish rock band U2 have released their new album "Achtung Baby". The films "Beauty and the Beast" and "The Addams Family" have just been released in movie theaters.

Music fans are currently mourning the deaths of Queen singer Freddie Mercury and KISS drummer Eric Carr. Mercury recently passed away after a battle with AIDS and Carr died from complications of heart cancer. If you were to travel back to this day, notable figures such as Freddie Mercury, Robert Reed and Anthony Perkins would all be still alive. On TV, people are watching popular shows such as "Cheers", "Roseanne", "Quantum Leap" and "One Foot in the Grave".

Meanwhile, gamers are playing titles such as "Phantasy Star II", "Sonic the Hedgehog", "Streets of Rage" and "The Legend of Zelda: A Link to the Past". Kids and teenagers are watching TV shows such as "The Cosby Show", "The Care Bears", "Teenage Mutant Ninja Turtles" and "The Adventures of Tintin". If you're a kid or a teenager, then you're probably playing with toys such as Sylvanian Families, Koosh Ball, Polly Pocket and Super Soaker (water gun).

These are trending news stories and fads that were prevalent at this time. These are topics that would have been in the media on November 24th, 1991.

Check out our personality summary for people who were born on November 24th, 1991.

If you are looking for some childhood nostalgia, then you should check out November 24th, 1997 instead.

George W. Bush Snr. was the President of the United States on November 24th, 1991.

Enter your date of birth below to find out how old you were on November 24th, 1991.
This information is not transmitted to our server.

Here are some fun statistics about November 24th, 1991.