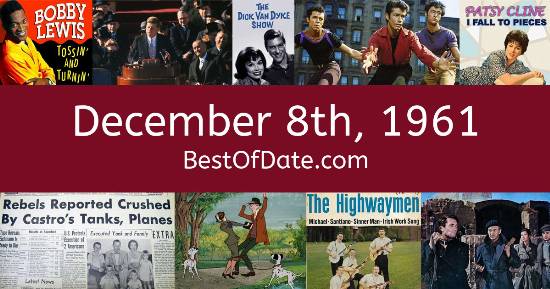 These songs were on top of the music charts in the United States and the United Kingdom on December 8th, 1961.

The date is December 8th, 1961, and it's a Friday. Anyone born today will have the star sign Sagittarius. Currently, people have "that Friday feeling" and are looking forward to the weekend.

The Christmas season of 1961 has began. In America, the song Big Bad John by Jimmy Dean is on top of the singles charts. Over in the UK, Tower Of Strength by Frankie Vaughan is the number one hit song.

John Fitzgerald Kennedy is currently the President of the United States, and the movie King of Kings is at the top of the Box Office. In the United Kingdom, Harold Macmillan is the current Prime Minister. Tailfins on cars are extremely popular at the moment. The design looks futuristic, almost like a rocket or the twin rudders on the back of an airplane.

On TV, people are watching popular shows such as "What's My Line?", "Gunsmoke", "Danger Man" and "Hazel". Kids and teenagers are watching TV shows such as "Looney Tunes", "The Rifleman", "Noggin the Nog" and "The Many Loves of Dobie Gillis". If you're a kid or a teenager, then you're probably playing with toys such as the Frisbee, Metal House robots, Fisher Price Little People and Astrobase.

These are trending news stories and fads that were prevalent at this time. These are topics that would have been in the media on December 8th, 1961.

Check out our personality summary for people who were born on December 8th, 1961.

Television shows that people were watching in December, 1961.

If you are looking for some childhood nostalgia, then you should check out December 8th, 1967 instead.

Singer.
Born on December 8th, 1966
She was born exactly 5 years after this date.

Rapper.
Born on December 8th, 1982
She was born exactly 21 years after this date.

Soccer player.
Born on December 8th, 1994
He was born exactly 33 years after this date.

Soccer player.
Born on December 8th, 1999
He was born exactly 38 years after this date.

John Fitzgerald Kennedy was the President of the United States on December 8th, 1961.

Harold Macmillan was the Prime Minister of the United Kingdom on December 8th, 1961.

Enter your date of birth below to find out how old you were on December 8th, 1961.
This information is not transmitted to our server.

Here are some fun statistics about December 8th, 1961.