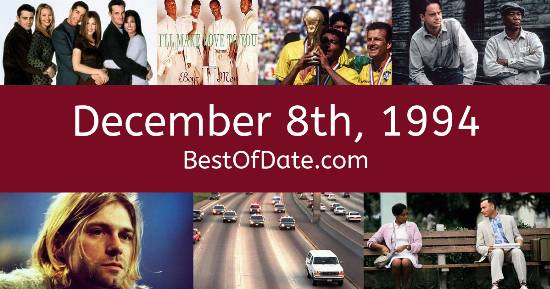 These songs were on top of the music charts in the United States and the United Kingdom on December 8th, 1994.

The movie "The Santa Clause" was at the top of the Box Office on December 8th, 1994.

The date is December 8th, 1994, and it's a Thursday. Anyone born today will have the star sign Sagittarius. The Christmas season of 1994 has began.

In America, the song On Bended Knee by Boyz II Men is on top of the singles charts. Over in the UK, Let Me Be Your Fantasy by Baby D. is the number one hit song. Bill Clinton is currently the President of the United States, and the movie The Santa Clause is at the top of the Box Office.

In Europe, a war is continuing to rage on in Bosnia and Herzegovina. In celebrity news, actor Richard Gere and supermodel Cindy Crawford have announced they are separating after four years of marriage. On television, the final episode of "Clarissa Explains It All", starring Melissa Joan Hart, has just been aired. The teen sitcom had been running since 1991.

If you were to travel back to this day, notable figures such as Richey Edwards, Eazy E, Selena and Bob Ross would all be still alive. On TV, people are watching popular shows such as "Full House", "Martin", "Beavis and Butt-Head" and "Frasier". Meanwhile, gamers are playing titles such as "Mortal Kombat", "Disney's Aladdin", "The Jungle Book" and "Super Street Fighter II".

Children and teenagers are currently watching television shows such as "Dink, the Little Dinosaur", "Art Attack", "Rosie and Jim" and "All That". If you're a kid or a teenager, then you're probably playing with toys such as Super Soaker (water gun), Power Rangers figures, Jurassic Park: Young Tyrannosaurus Rex and Dear Diary.

These are trending news stories and fads that were prevalent at this time. These are topics that would have been in the media on December 8th, 1994.

Check out our personality summary for people who were born on December 8th, 1994.

If you are looking for some childhood nostalgia, then you should check out December 8th, 2000, instead.

Celebrities, historical figures, and other notable people who were born on December 8th.

Soccer player.
Born on December 8th, 1999
He was born exactly 5 years after this date.

Bill Clinton was the President of the United States on December 8th, 1994.

Enter your date of birth below to find out how old you were on December 8th, 1994.
This information is not transmitted to our server.

Here are some fun statistics about December 8th, 1994.