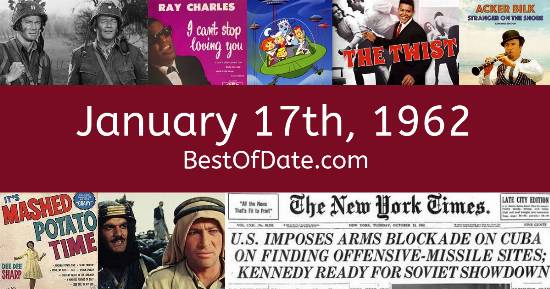 Songs that were on top of the music singles charts in the USA and the United Kingdom on January 17th, 1962.

The date is January 17th, 1962 and it's a Wednesday. Anyone born today will have the star sign Capricorn. In America, the song The Twist by Chubby Checker is on top of the singles charts.

Over in the UK, The Young Ones by Cliff Richard & The Shadows is the number one hit song. John Fitzgerald Kennedy is currently the President of the United States and the movie Flower Drum Song is at the top of the Box Office. In the United Kingdom, Harold Macmillan is the current Prime Minister.

On TV, people are watching popular shows such as "The Jack Benny Program", "Wagon Train", "The Twilight Zone" and "The Andy Griffith Show". Children and teenagers are currently watching television shows such as "The Rifleman", "Augie Doggie and Doggie Daddy", "The Bugs Bunny Show" and "Davey and Goliath". If you're a kid or a teenager, then you're probably playing with toys such as the Frisbee, Playpal dolls, Tonka trucks and Etch A Sketch.

If you are looking for some childhood nostalgia, then check out January 17th, 1968 instead.

First Lady.
Born on January 17th, 1964
She was born exactly 2 years after this date.

English TV personality.
Born on January 17th, 1992
She was born exactly 30 years after this date.

John Fitzgerald Kennedy was the President of the United States on January 17th, 1962.

Harold Macmillan was the Prime Minister of the United Kingdom on January 17th, 1962.

Enter your date of birth below to find out how old you were on January 17th, 1962.

Here are some fun statistics about January 17th, 1962.