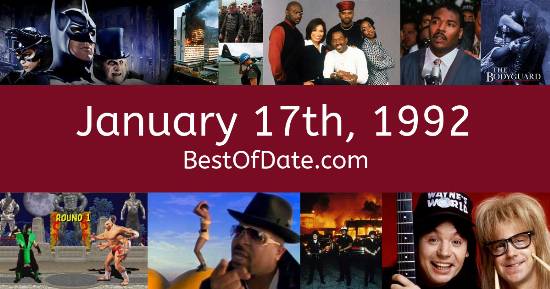 Songs that were on top of the music singles charts in the USA and the United Kingdom on January 17th, 1992.

The date is January 17th, 1992 and it's a Friday. Anyone born today will have the star sign Capricorn. Currently, people have "that Friday feeling" and are looking forward to the weekend.

A new crime thriller film called Juice, starring rapper Tupac Shakur as "Bishop", has been released in movie theaters. If you were to travel back to this day, notable figures such as Robert Reed, Anthony Perkins, Audrey Hepburn and Thurgood Marshall would all be still alive. On TV, people are watching popular shows such as "Magnum, P.I.", "In the Heat of the Night", "Roseanne" and "Dinosaurs".

Meanwhile, gamers are playing titles such as "Duck Hunt", "Paperboy", "The Simpsons: Bart vs. the Space Mutants" and "F-Zero". Children and teenagers are currently watching television shows such as "Adventures of the Little Koala", "Art Attack", "Beverly Hills, 90210" and "Are You Afraid of the Dark?". Popular toys at the moment include the likes of Cabbage Patch Kids, My Little Pony (figures), Sylvanian Families and Super Soaker (water gun).

If you are looking for some childhood nostalgia, then check out January 17th, 1998 instead.

Youtuber.
Born on January 17th, 1997
He was born exactly 5 years after this date.

George W. Bush Snr. was the President of the United States on January 17th, 1992.

John Major was the Prime Minister of the United Kingdom on January 17th, 1992.

Enter your date of birth below to find out how old you were on January 17th, 1992.

Here are some fun statistics about January 17th, 1992.