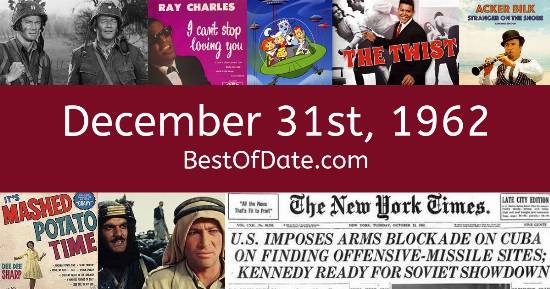 On December 31st, 1962, the following songs were at the top of the music charts in the USA and the UK.

The top "Box Office" movie on this date was the film "Mutiny on the Bounty".

The date is December 31st, 1962, and it's a Monday. Anyone born today will have the star sign Capricorn. It's News Years Eve and everyone is looking forward to what the year 1963 will bring them.

In America, the song Telstar by The Tornados is on top of the singles charts. Over in the UK, Bachelor Boy / The Next Time by Cliff Richard & The Shadows is the number one hit song. John Fitzgerald Kennedy is currently the President of the United States, and the movie Mutiny on the Bounty is at the top of the Box Office.

The historical film "Lawrence of Arabia" is currently being shown in movie theaters. If you were to travel back to this day, notable figures such as Robert Frost, Ernie Davis and John F. Kennedy would all be still alive. On TV, people are watching popular shows such as "Have Gun - Will Travel", "Rawhide", "Route 66" and "Hazel".

Children and teenagers are currently watching television shows such as "Mighty Mouse Playhouse", "Noggin the Nog", "The Many Loves of Dobie Gillis" and "The Flintstones". Popular toys at the moment include the likes of Metal House robots, Troll doll, Rock-a-Stack and Chatter Telephone.

These are trending news stories and fads that were prevalent at this time. These are topics that would have been in the media on December 31st, 1962.

News stories and other events that happened around December 31st, 1962.

Check out our personality summary for people who were born on December 31st, 1962.

Television shows that people were watching in December, 1962.

If you are looking for some childhood nostalgia, then you should check out December 31st, 1968 instead.

South Korean singer.
Born on December 31st, 1977
He was born exactly 15 years after this date.

American businessman.
Born on December 31st, 1977
He was born exactly 15 years after this date.

John Fitzgerald Kennedy was the President of the United States on December 31st, 1962.

Harold Macmillan was the Prime Minister of the United Kingdom on December 31st, 1962.

Find out what your age was on December 31st, 1962, by entering your DOB below.
This information is not saved on our server.

Here are some fun statistics about December 31st, 1962.