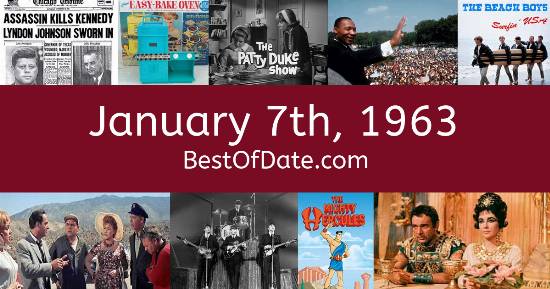 These songs were on top of the music charts in the United States and the United Kingdom on January 7th, 1963.

The date is January 7th, 1963, and it's a Monday. Anyone born today will have the star sign Capricorn. People are starting to return back to work and school after the Christmas holidays.

In America, the song Go Away Little Girl by Steve Lawrence is on top of the singles charts. Over in the UK, Bachelor Boy / The Next Time by Cliff Richard & The Shadows is the number one hit song. John Fitzgerald Kennedy is currently the President of the United States, and the movie Taras Bulba is at the top of the Box Office.

If you were to travel back to this day, notable figures such as Robert Frost, Ernie Davis, John F. Kennedy and Herbert Hoover would all be still alive. On TV, people are watching popular shows such as "Have Gun - Will Travel", "Perry Mason", "The Andy Griffith Show" and "Hazel". Children and teenagers are currently watching television shows such as "Heckle and Jeckle", "The Bugs Bunny Show", "King Leonardo and His Short Subjects" and "Davey and Goliath".

If you're a kid or a teenager, then you're probably playing with toys such as the Hula Hoop, Crater Critters, Barbie and Mouse Trap.

These are trending news stories and fads that were prevalent at this time. These are topics that would have been in the media on January 7th, 1963.

News stories and other events that happened around January 7th, 1963.

Check out our personality summary for people who were born on January 7th, 1963.

Television shows that people were watching in January, 1963.

If you are looking for some childhood nostalgia, then you should check out January 7th, 1969 instead.

Actor.
Born on January 7th, 1964
He was born exactly one year after this date.

Actor. Deceased
Born on January 7th, 1977
He was born exactly 14 years after this date.

Formula One.
Born on January 7th, 1985
He was born exactly 22 years after this date.

Soccer player.
Born on January 7th, 1991
He was born exactly 28 years after this date.

John Fitzgerald Kennedy was the President of the United States on January 7th, 1963.

Harold Macmillan was the Prime Minister of the United Kingdom on January 7th, 1963.

Find out what your age was on January 7th, 1963, by entering your DOB below.
This information is not saved on our server.

Here are some fun statistics about January 7th, 1963.