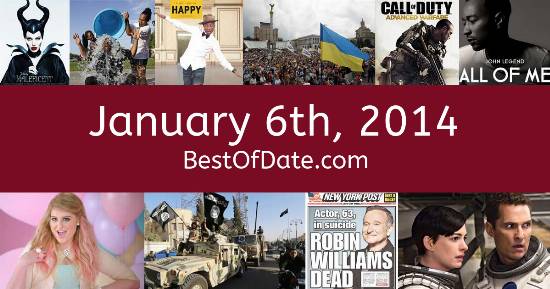 These songs were on top of the music charts in the United States and the United Kingdom on January 6th, 2014.

The date is January 6th, 2014, and it's a Monday. Anyone born today will have the star sign Capricorn. People are starting to return back to work and school after the Christmas holidays.

In America, the song The Monster by Eminem ft Rihanna is on top of the singles charts. Over in the UK, Happy by Pharrell Williams is the number one hit song. Barack Obama is currently the President of the United States, and the movie Frozen is at the top of the Box Office.

A new Internet meme called "Doge", which consists of an image of a Shiba Inu dog with broken English written on it, is being shared online at the moment. A mobile game called "Flappy Bird" is currently surging in popularity. A suicide bombing at the Volgograd-1 railway station in Russia has left 18 people dead. Formula One star Michael Schumacher is currently in intensive care after he suffered a brain injury during a recent skiing accident.

Tributes are pouring in for American actor James Avery, who portrayed Uncle Phil in the sitcom "The Fresh Prince of Bel-Air". Avery passed away following complications from a recent open heart surgery. Colorado has just become the first US state to legalize the sale of marijuana. It is 2014, so the music charts are being dominated by artists such as Pharrell Williams, Katy Perry, John Legend, Iggy Azalea, Meghan Trainor, Lorde and Jason Derulo.

If you were to travel back to this day, notable figures such as Ariel Sharon, Philip Seymour Hoffman, Viscera and Peaches Geldof would all be still alive. On TV, people are watching popular shows such as "Grey's Anatomy", "Bones", "Glee" and "Community". Meanwhile, gamers are playing titles such as "ARMA 3", "Pokémon X and Y", "Batman: Arkham Origins" and "Call of Duty: Ghosts".

Kids and teenagers are watching TV shows such as "Dora the Explorer", "Johnny Test", "Mickey Mouse Clubhouse" and "The Thundermans". Popular toys at the moment include the likes of the Wii U, the PlayStation 4, the Xbox One and Frozen dolls.

These are trending news stories and fads that were prevalent at this time. These are topics that would have been in the media on January 6th, 2014.

Check out our personality summary for people who were born on January 6th, 2014.

If you are looking for some childhood nostalgia, then you should check out January 6th, 2020 instead.

Actress. Deceased
Born on January 6th, 1964
She was not alive on this date.

Barack Obama was the President of the United States on January 6th, 2014.

David Cameron was the Prime Minister of the United Kingdom on January 6th, 2014.

Enter your date of birth below to find out how old you were on January 6th, 2014.
This information is not transmitted to our server.

Here are some fun statistics about January 6th, 2014.