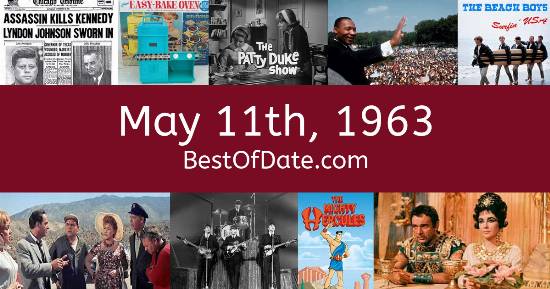 These songs were on top of the music charts in the United States and the United Kingdom on May 11th, 1963.

The movie "How the West Was Won" was at the top of the Box Office on this day.

The date is May 11th, 1963, and it's a Saturday. Anyone born today will have the star sign Taurus. Currently, people are enjoying their weekend.

The summer of 1963 has finally arrived. The weather has warmed up and the evenings are brighter than usual. In America, the song I Will Follow Him by Little Peggy March is on top of the singles charts. Over in the UK, From Me To You by The Beatles is the number one hit song.

Because it's 1963, radio stations are playing hit songs from music artists such as The Chiffons, Paul & Paula, The Four Seasons, Little Stevie Wonder, Jimmy Gilmer and the Fireballs and The Singing Nun. If you were to travel back to this day, notable figures such as Ernie Davis, John F. Kennedy, Herbert Hoover and Sam Cooke would all be still alive. On TV, people are watching popular shows such as "The Ed Sullivan Show", "What's My Line?", "Bonanza" and "The Andy Griffith Show".

Kids and teenagers are watching TV shows such as "Tom and Jerry", "Captain Pugwash", "The Many Loves of Dobie Gillis" and "The Bugs Bunny Show". Popular toys at the moment include the likes of BAS-KET Miniature Basketball, Metal House robots, Rock-a-Stack and Tammy (doll).

These are trending news stories and fads that were prevalent at this time. These are topics that would have been in the media on May 11th, 1963.

News stories and other events that happened around May 11th, 1963.

Check out our personality summary for people who were born on May 11th, 1963.

If you are looking for some childhood nostalgia, then you should check out May 11th, 1969 instead.

Spanish soccer player.
Born on May 11th, 1984
He was born exactly 21 years after this date.

Former soccer player.
Born on May 11th, 1986
He was born exactly 23 years after this date.

Belgian soccer player.
Born on May 11th, 1992
He was born exactly 29 years after this date.

John Fitzgerald Kennedy was the President of the United States on May 11th, 1963.

Harold Macmillan was the Prime Minister of the United Kingdom on May 11th, 1963.

Find out what your age was on May 11th, 1963, by entering your DOB below.
This information is not saved on our server.