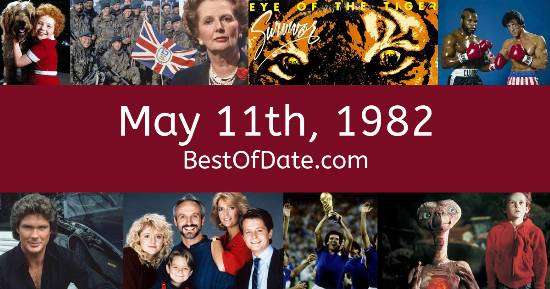 Songs that were on top of the music singles charts in the USA and the United Kingdom on May 11th, 1982.

The date is May 11th, 1982 and it's a Tuesday. Anyone born today will have the star sign Taurus. The summer of 1982 has finally arrived. The weather has warmed up and the evenings are brighter than usual.

In America, the song Chariots Of Fire by Vangelis is on top of the singles charts. Over in the UK, Ebony And Ivory by Paul McCartney & Stevie Wonder is the number one hit song. Ronald Reagan is currently the President of the United States and the movie Porky's is at the top of the Box Office.

If you were to travel back to this day, notable figures such as Karen Carpenter and Jobriath would be still alive. On TV, people are watching popular shows such as "Last of the Summer Wine", "Happy Days", "Laverne & Shirley" and "Three's Company". Meanwhile, gamers are playing titles such as "Space Invaders", "Pac-Man", "Missile Command" and "Donkey Kong".

Children and teenagers are currently watching television shows such as "Captain Kangaroo", "The Bugs Bunny Show", "Fat Albert and the Cosby Kids" and "The Smurfs". If you're a kid or a teenager, then you're probably playing with toys such as the Atari 2600, Snoopy Sno-Cone Machine, Intellivision (games console) and Fischer Price cassette player.

Notable events that occurred around May 11th, 1982.

If you are looking for some childhood nostalgia, then check out May 11th, 1988 instead.

Spanish soccer player.
Born on May 11th, 1984
He was born exactly 2 years after this date.

Former soccer player.
Born on May 11th, 1986
He was born exactly 4 years after this date.

Belgian soccer player.
Born on May 11th, 1992
He was born exactly 10 years after this date.

Ronald Reagan was the President of the United States on May 11th, 1982.

Margaret Thatcher was the Prime Minister of the United Kingdom on May 11th, 1982.