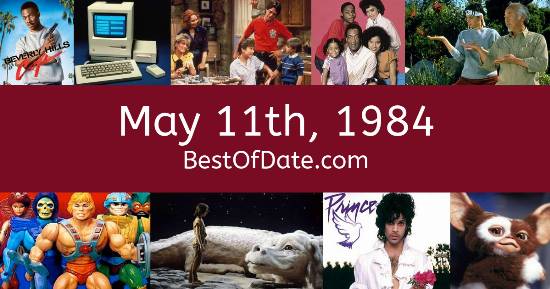 Songs that were on top of the music singles charts in the USA and the United Kingdom on May 11th, 1984.

The date is May 11th, 1984 and it's a Friday. Anyone born today will have the star sign Taurus. Currently, people have "that Friday feeling" and are looking forward to the weekend.

The summer of 1984 has finally arrived. The weather has warmed up and the evenings are brighter than usual. In America, the song Hello by Lionel Richie is on top of the singles charts. Over in the UK, The Reflex by Duran Duran is the number one hit song.

Ronald Reagan is currently the President of the United States and the movie Breakin' is at the top of the Box Office. In the United Kingdom, Margaret Thatcher is the current Prime Minister. Because it's 1984, the radio stations are being dominated by artists such as George Michael, Stevie Wonder, Wham!, Cyndi Lauper and Frankie Goes to Hollywood.

Children and teenagers are currently watching television shows such as "Fat Albert and the Cosby Kids", "Happy Days", "The Smurfs" and "He-Man and the Masters of the Universe". Popular toys at the moment include the likes of Lite-Brite, Big Jim (action figure), Water Ring Toss and Snoopy Sno-Cone Machine.

Notable events that occurred around May 11th, 1984.

Ronald Reagan was the President of the United States on May 11th, 1984.

Margaret Thatcher was the Prime Minister of the United Kingdom on May 11th, 1984.

Leave a comment and tell everyone why May 11th, 1984 is important to you.