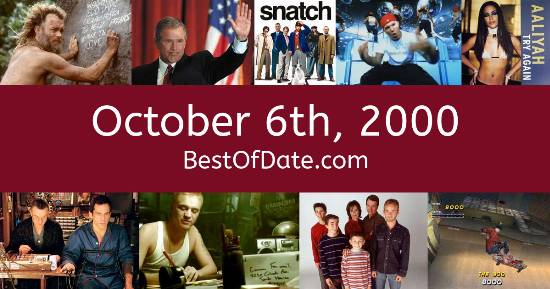 Songs that were on top of the music singles charts in the USA and the United Kingdom on October 6th, 2000:

The date is October 6th, 2000 and it's a Friday. Anyone born today will have the star sign Libra. Currently, people have "that Friday feeling" and are looking forward to the weekend.

The summer is long gone. Temperatures have started to become much cooler and the evenings are beginning to get darker. Fallen leaves have carpeted driveways, lawns, pathways and sidewalks and there's a fresh earthy scent in the ear. In America, the song Music by Madonna is on top of the singles charts.

Over in the UK, Against All Odds by Mariah Carey & Westlife is the number one hit song. Bill Clinton is currently the President of the United States and the movie Remember the Titans is at the top of the Box Office. In the United Kingdom, Tony Blair is the current Prime Minister.

It's the year 2000, so the music charts are being dominated by the likes of Christina Aguilera, Savage Garden, Destiny's Child, Santana and Enrique Iglesias. The Nokia 3310 is one of the most popular phones on the market at the moment. People are watching popular TV shows such as "3rd Rock from the Sun", "Sabrina, the Teenage Witch", "Beyond Belief: Fact or Fiction" and "Sex and the City".

Meanwhile, gamers are playing titles such as "Ape Escape", "The Sims", "Pokémon Stadium" and "Resident Evil – Code: Veronica". Kids and teenagers are watching TV shows such as "The Simpsons", "7th Heaven", "The Angry Beavers" and "Bear in the Big Blue House". Popular toys include the likes of "Groovy Girls", "Game Boy Color", "The Dreamcast" and "Razor (scooter)".

Celebrities and historical figures that were born on the 6th of October:

Who was the Prime Minister of the United Kingdom on October 6th, 2000?

Enter your date of birth below to find out how old you were on October 6th, 2000.

Looking for some nostalgia? Here are some Youtube videos relating to October 6th, 2000. Please note that videos are automatically selected by Youtube and that results may vary! Click on the "Load Next Video" button to view the next video in the search playlist. In many cases, you'll find episodes of old TV shows, documentaries, music videos and soap dramas.

Here are some fun statistics about October 6th, 2000.