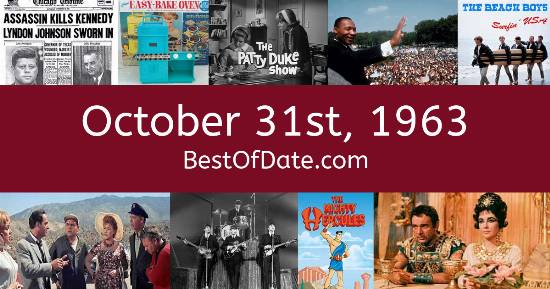 On October 31st, 1963, the following songs were at the top of the music charts in the USA and the UK.

The following comments about October 31st, 1963 were written by our visitors.

The date is October 31st, 1963, and it's a Thursday. Anyone born today will have the star sign Scorpio. The summer is long gone. Temperatures have started to become much cooler and the evenings are beginning to get darker.

Fallen leaves have carpeted driveways, lawns, pathways and sidewalks and there's a fresh earthy scent in the ear. It's Halloween, so kids are trick-or-treating and horror movies are being shown on TV. In America, the song Sugar Shack by Jimmy Gilmer & The Fireballs is on top of the singles charts.

Over in the UK, You'll Never Walk Alone by Gerry & The Pacemakers is the number one hit song. John Fitzgerald Kennedy is currently the President of the United States, and the movie Cleopatra is at the top of the Box Office. In the United Kingdom, Sir Alec Douglas-Home is the current Prime Minister.

On TV, people are watching popular shows such as "The Jack Benny Program", "Route 66", "Hazel" and "My Favorite Martian". Kids and teenagers are watching TV shows such as "Mighty Mouse Playhouse", "The Many Loves of Dobie Gillis", "The Dick Tracy Show" and "Davey and Goliath". If you're a kid or a teenager, then you're probably playing with toys such as Crater Critters, Barbie, Astrobase and Tammy (doll).

These are trending news stories and fads that were prevalent at this time. These are topics that would have been in the media on October 31st, 1963.

News stories and other events that happened around October 31st, 1963.

Check out our personality summary for people who were born on October 31st, 1963.

Television shows that people were watching in October, 1963.

If you are looking for some childhood nostalgia, then you should check out October 31st, 1969 instead.

Argentine soccer player. Deceased
Born on October 31st, 1990
He was born exactly 27 years after this date.

Soccer player.
Born on October 31st, 1997
He was born exactly 34 years after this date.

John Fitzgerald Kennedy was the President of the United States on October 31st, 1963.

Find out what your age was on October 31st, 1963, by entering your DOB below.
This information is not saved on our server.

Here are some fun statistics about October 31st, 1963.