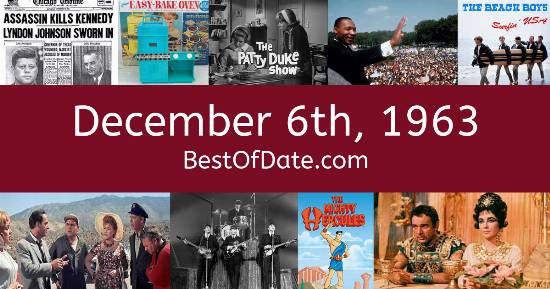 Songs that were on top of the music singles charts in the USA and the United Kingdom on December 6th, 1963.

The movie "Under the Yum Yum Tree" was at the top of the box office on December 6th, 1963.

The date is December 6th, 1963 and it's a Friday. Anyone born today will have the star sign Sagittarius. Currently, people have "that Friday feeling" and are looking forward to the weekend.

The Christmas season of 1963 has just started. In America, the song Dominique by The Singing Nun is on top of the singles charts. Over in the UK, She Loves You by The Beatles is the number one hit song.

Lyndon Baines Johnson is currently the President of the United States and the movie Under the Yum Yum Tree is at the top of the Box Office. In the United Kingdom, Sir Alec Douglas-Home is the current Prime Minister. In fashion, many of the trends from the late 1950s are still popular. Women are wearing tailored skirts, short boxy jackets and shift dresses. Trousers are also becoming popular amongst women. Meanwhile, men are wearing polo shirts, argyle socks, sweater vests, loafers and harrington jackets.

Because it's 1963, radio stations are playing hit songs from music artists such as The Chiffons, Paul & Paula, The Four Seasons, Little Stevie Wonder, Jimmy Gilmer and the Fireballs and The Singing Nun. On TV, people are watching popular shows such as "What's My Line?", "The Danny Thomas Show", "Bonanza" and "My Favorite Martian". Children and teenagers are currently watching television shows such as "The Gumby Show", "The Rifleman", "My Three Sons" and "The Patty Duke Show".

If you're a kid or a teenager, then you're probably playing with toys such as Etch A Sketch, Ken (doll), Mouse Trap and the Easy-Bake Oven.

If you are looking for some childhood nostalgia, then check out December 6th, 1969 instead.

Cricket player.
Born on December 6th, 1977
He was born exactly 14 years after this date.

NBA player.
Born on December 6th, 1994
He was born exactly 31 years after this date.

Lyndon Baines Johnson was the President of the United States on December 6th, 1963.

Sir Alec Douglas-Home was the Prime Minister of the United Kingdom on December 6th, 1963.

Enter your date of birth below to find out how old you were on December 6th, 1963.

Here are some fun statistics about December 6th, 1963.

Have something to say about December 6th, 1963?