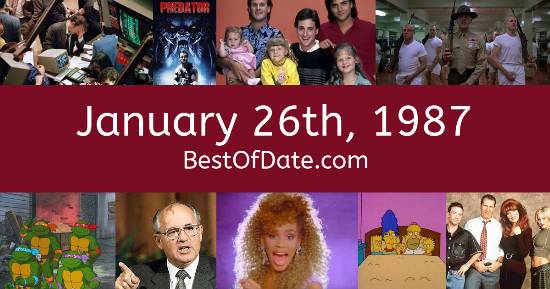 Songs that were on top of the music singles charts in the USA and the United Kingdom on January 26th, 1987.

The movie "Critical Condition" was at the top of the box office on January 26th, 1987.

The date is January 26th, 1987 and it's a Monday. Anyone born today will have the star sign Aquarius. In America, the song At This Moment by Billy Vera is on top of the singles charts.

Over in the UK, Jack Your Body by Steve Silk Hurley is the number one hit song. Ronald Reagan is currently the President of the United States and the movie Critical Condition is at the top of the Box Office. In the United Kingdom, Margaret Thatcher is the current Prime Minister.

Meanwhile, gamers are playing titles such as "Mario Bros.", "Duck Hunt", "Tetris" and "Ultima IV: Quest of the Avatar". Kids and teenagers are watching TV shows such as "Fraggle Rock", "Muppet Babies", "The Transformers" and "The Cosby Show". If you're a kid or a teenager, then you're probably playing with toys such as the Commodore 64, Transformers, Garbage Pail Kids (trading cards) and Sylvanian Families.

If you are looking for some childhood nostalgia, then check out January 26th, 1993 instead.

Wrestler.
Born on January 26th, 1992
She was born exactly 5 years after this date.

Ronald Reagan was the President of the United States on January 26th, 1987.

Margaret Thatcher was the Prime Minister of the United Kingdom on January 26th, 1987.

Enter your date of birth below to find out how old you were on January 26th, 1987.

Here are some fun statistics about January 26th, 1987.