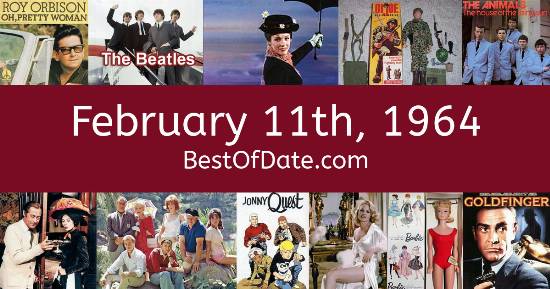 These songs were on top of the music charts in the United States and the United Kingdom on February 11th, 1964.

The movie "The Prize" was at the top of the Box Office on this day.

The date is February 11th, 1964, and it's a Tuesday. Anyone born today will have the star sign Aquarius. Valentine's Day is just around the corner.

In America, the song I Want To Hold Your Hand by The Beatles is on top of the singles charts. Over in the UK, Needles And Pins by The Searchers is the number one hit song. Lyndon Baines Johnson is currently the President of the United States, and the movie The Prize is at the top of the Box Office.

If you were to travel back to this day, notable figures such as Herbert Hoover, Sam Cooke, T. S. Eliot and Winston Churchill would all be still alive. On TV, people are watching popular shows such as "Wagon Train", "Perry Mason", "Rawhide" and "Steptoe and Son". Kids and teenagers are watching TV shows such as "Heckle and Jeckle", "Courageous Cat and Minute Mouse", "The Bugs Bunny Show" and "Davey and Goliath".

Popular toys at the moment include the likes of Barbie, Ken (doll), Big Loo and Johnny Seven OMA (toy gun).

These are trending news stories and fads that were prevalent at this time. These are topics that would have been in the media on February 11th, 1964.

News stories and other events that happened around February 11th, 1964.

Check out our personality summary for people who were born on February 11th, 1964.

Television shows that people were watching in February, 1964.

If you are looking for some childhood nostalgia, then you should check out February 11th, 1970 instead.

Actress.
Born on February 11th, 1969
She was born exactly 5 years after this date.

South Korean singer.
Born on February 11th, 1997
She was born exactly 33 years after this date.

Lyndon Baines Johnson was the President of the United States on February 11th, 1964.

Sir Alec Douglas-Home was the Prime Minister of the United Kingdom on February 11th, 1964.

Find out what your age was on February 11th, 1964, by entering your DOB below.
This information is not saved on our server.

Here are some fun statistics about February 11th, 1964.