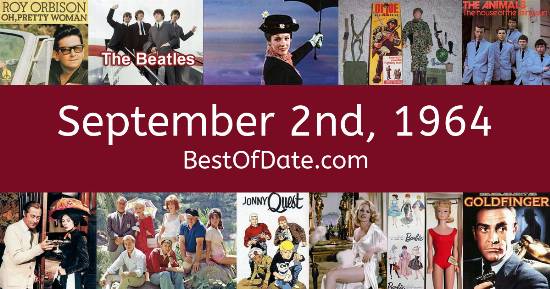 September 2nd, 1964 relates to a fictional event in a movie, book, game or television series.

Songs that were on top of the music singles charts in the USA and the United Kingdom on September 2nd, 1964.

The movie "The Unsinkable Molly Brown" was at the top of the box office on September 2nd, 1964.

The date is September 2nd, 1964 and it's a Wednesday. Anyone born today will have the star sign Virgo. Schools and colleges are starting again and Autumn has officially arrived. As a result, temperatures are beginning to cool and trees are starting to shed their leaves.

In America, the song The House Of The Rising Sun by Animals is on top of the singles charts. Over in the UK, Have I The Right by The Honeycombs is the number one hit song. Lyndon Baines Johnson is currently the President of the United States and the movie The Unsinkable Molly Brown is at the top of the Box Office.

A musical fantasy film called "Mary Poppins" is currently being shown in movie theaters. If you were to travel back to this day, notable figures such as Herbert Hoover, Sam Cooke, T. S. Eliot and Winston Churchill would all be still alive. On TV, people are watching popular shows such as "What's My Line?", "The Danny Thomas Show", "Perry Mason" and "The Andy Griffith Show".

Children and teenagers are currently watching television shows such as "The Gumby Show", "The Flintstones", "The Dick Tracy Show" and "The Patty Duke Show". If you're a kid or a teenager, then you're probably playing with toys such as Metal House robots, Crater Critters, Troll doll and Tammy (doll).

If you are looking for some childhood nostalgia, then check out September 2nd, 1970 instead.

Actress.
Born on September 2nd, 1966
She was born exactly 2 years after this date.

Lyndon Baines Johnson was the President of the United States on September 2nd, 1964.

Sir Alec Douglas-Home was the Prime Minister of the United Kingdom on September 2nd, 1964.

Have something to say about September 2nd, 1964?

Enter your date of birth below to find out how old you were on September 2nd, 1964.

Here are some fun statistics about September 2nd, 1964.