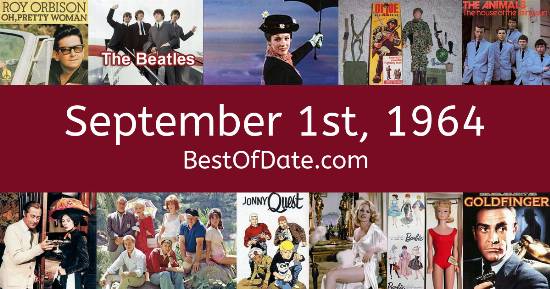 Songs that were on top of the music singles charts in the USA and the United Kingdom on September 1st, 1964.

The movie "The Unsinkable Molly Brown" was at the top of the Box Office on September 1st, 1964.

The date is September 1st, 1964, and it's a Tuesday. Anyone born today will have the star sign Virgo. Schools and colleges are starting again and Autumn has officially arrived. As a result, temperatures are beginning to cool and trees are starting to shed their leaves.

In America, the song The House Of The Rising Sun by Animals is on top of the singles charts. Over in the UK, Have I The Right by The Honeycombs is the number one hit song. Lyndon Baines Johnson is currently the President of the United States, and the movie The Unsinkable Molly Brown is at the top of the Box Office.

A musical fantasy film called "Mary Poppins" is currently being shown in movie theaters. If you were to travel back to this day, notable figures such as Herbert Hoover, Sam Cooke, T. S. Eliot and Winston Churchill would all be still alive. On TV, people are watching popular shows such as "The Jack Benny Program", "Danger Man", "The Andy Griffith Show" and "My Favorite Martian".

Children and teenagers are currently watching television shows such as "The Gumby Show", "Captain Pugwash", "Top Cat" and "Ricochet Rabbit & Droop-a-Long". Popular toys at the moment include the likes of Tonka trucks, Mouse Trap, the Easy-Bake Oven and Army men.

These are trending news stories and fads that were prevalent at this time. These are topics that would have been in the media on September 1st, 1964.

News stories and other events that happened around September 1st, 1964.

Check out our personality summary for people who were born on September 1st, 1964.

Television shows that people were watching in September, 1964.

If you are looking for some childhood nostalgia, then you should check out September 1st, 1970 instead.

English soccer player.
Born on September 1st, 1989
He was born exactly 25 years after this date.

Actress.
Born on September 1st, 1996
She was born exactly 32 years after this date.

BTS member.
Born on September 1st, 1997
He was born exactly 33 years after this date.

Lyndon Baines Johnson was the President of the United States on September 1st, 1964.

Sir Alec Douglas-Home was the Prime Minister of the United Kingdom on September 1st, 1964.

Find out what your age was on September 1st, 1964, by entering your DOB below.
This information is not saved on our server.

Here are some fun statistics about September 1st, 1964.