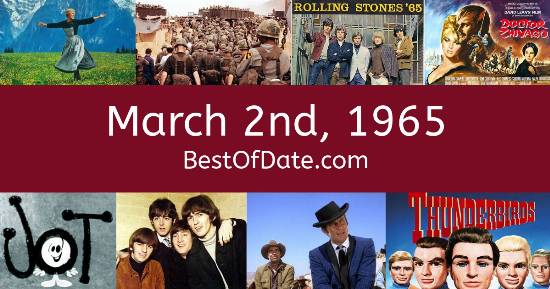 Songs that were on top of the music singles charts in the USA and the United Kingdom on March 2nd, 1965:

The date is March 2nd, 1965 and it's a Tuesday. Anyone born today will have the star sign Pisces. Spring has started to creep in and the days are beginning to get longer.

In America, the song This Diamond Ring by Gary Lewis & Playboys is on top of the singles charts. Over in the UK, I'll Never Find Another You by Seekers is the number one hit song. Lyndon Baines Johnson is currently the President of the United States and Harold Wilson is the Prime Minister of the United Kingdom.

In fashion, women are wearing miniskirts and "space age" attire with synthetic materials. The "Dolly Girl" look has also become popular. Meanwhile, men are beginning to transition into "surf rock" fashion, which has been made popular by bands such as The Beach Boys. "Greasers", who are influenced by rock 'n' roll fashion, have also become a popular subculture. Because it's 1965, radio stations are playing hit songs from music artists such as The Rolling Stones, The Byrds, The Beatles, Sonny & Cher and The Supremes. A musical drama film called "The Sound of Music" is currently being shown in movie theaters.

On TV, people are watching popular shows such as "What's My Line?", "The Jack Benny Program", "Bonanza" and "Hazel". Kids and teenagers are watching TV shows such as "The Flintstones", "Mister Ed", "The Patty Duke Show" and "Jonny Quest". If you're a kid or a teenager, then you're probably playing with toys such as "Ken (doll)", "Easy-Bake Oven", "Rock 'Em Sock 'Em Robots" and "Motorific (slot car toys)".

Celebrities, historical figures and noteable people who were born on the 2nd of March:

Who was the Prime Minister of the United Kingdom on March 2nd, 1965?

Enter your date of birth below to find out how old you were on March 2nd, 1965.

Looking for some nostalgia? Here are some Youtube videos relating to March 2nd, 1965. Please note that videos are automatically selected by Youtube and that results may vary! Click on the "Load Next Video" button to view the next video in the search playlist. In many cases, you'll find episodes of old TV shows, documentaries, music videos and soap dramas.

Here are some fun statistics about March 2nd, 1965.