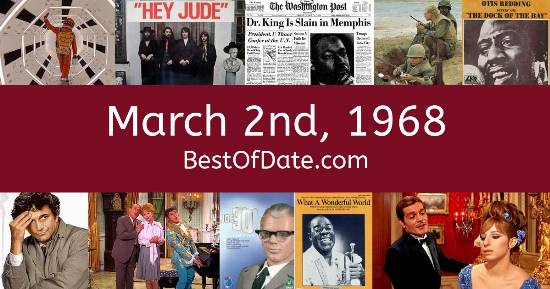 Songs that were on top of the music singles charts in the USA and the United Kingdom on March 2nd, 1968.

The date is March 2nd, 1968 and it's a Saturday. Anyone born today will have the star sign Pisces. Currently, people are enjoying their weekend.

Spring has started to creep in and the days are beginning to get longer. In America, the song Love Is Blue by Paul Mauriat is on top of the singles charts. Over in the UK, Cinderella Rockefella by Esther & Abi Ofarim is the number one hit song.

On TV, people are watching popular shows such as "The Ed Sullivan Show", "What's My Line?", "Bonanza" and "Gilligan's Island". Children and teenagers are currently watching television shows such as "The Gumby Show", "The King Kong Show", "Birdman and the Galaxy Trio" and "Mister Rogers' Neighborhood". If you're a kid or a teenager, then you're probably playing with toys such as the Easy-Bake Oven, Army men, Motorific (slot car toys) and Barrel of Monkeys.

If you are looking for some childhood nostalgia, then check out March 2nd, 1974 instead.

Lyndon Baines Johnson was the President of the United States on March 2nd, 1968.

Harold Wilson was the Prime Minister of the United Kingdom on March 2nd, 1968.

Enter your date of birth below to find out how old you were on March 2nd, 1968.

Here are some fun statistics about March 2nd, 1968.