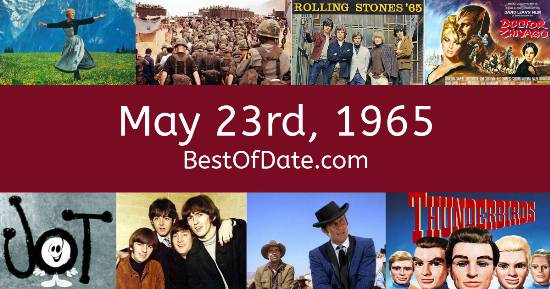 Songs that were on top of the music singles charts in the USA and the United Kingdom on May 23rd, 1965.

The date is May 23rd, 1965 and it's a Sunday. Anyone born today will have the star sign Gemini. Currently, people are enjoying their weekend.

The summer of 1965 has finally arrived. The weather has warmed up and the evenings are brighter than usual. In America, the song Mrs. Brown You've Got A Lovely Daughter by Herman's Hermits is on top of the singles charts. Over in the UK, King Of The Road by Roger Miller is the number one hit song.

On TV, people are watching popular shows such as "What's My Line?", "Perry Mason", "The Andy Griffith Show" and "Gilligan's Island". Kids and teenagers are watching TV shows such as "Lassie", "Mighty Mouse Playhouse", "The Flintstones" and "Jonny Quest". Popular toys at the moment include the likes of Chatter Telephone, the Easy-Bake Oven, Johnny Seven OMA (toy gun) and Motorific (slot car toys).

Notable events that occurred around May 23rd, 1965.

Lyndon Baines Johnson was the President of the United States on May 23rd, 1965.

Harold Wilson was the Prime Minister of the United Kingdom on May 23rd, 1965.

Leave a comment and tell everyone why May 23rd, 1965 is important to you.