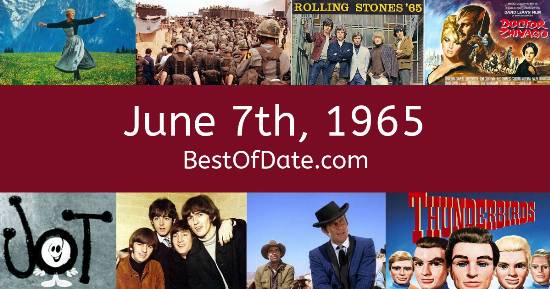 These songs were on top of the music charts in the United States and the United Kingdom on June 7th, 1965.

The date is June 7th, 1965, and it's a Monday. Anyone born today will have the star sign Gemini. It's summer, so the temperatures are warmer and the evenings are longer than usual.

In America, the song Help Me Rhonda by The Beach Boys is on top of the singles charts. Over in the UK, Long Live Love by Sandie Shaw is the number one hit song. Lyndon Baines Johnson is currently the President of the United States, and the movie The Sound of Music is at the top of the Box Office.

English rock band The Rolling Stones have recently released a new song called "(I Can't Get No) Satisfaction". If you were to travel back to this day, notable figures such as Walt Disney would be still alive. On TV, people are watching popular shows such as "Perry Mason", "The Andy Griffith Show", "Shindig!" and "Hullabaloo".

Children and teenagers are currently watching television shows such as "Looney Tunes", "Captain Kangaroo", "Mister Ed" and "Hoppity Hooper". If you're a kid or a teenager, then you're probably playing with toys such as Rock-a-Stack, Tammy (doll), Big Loo and the Easy-Bake Oven.

These are trending news stories and fads that were prevalent at this time. These are topics that would have been in the media on June 7th, 1965.

News stories and other events that happened around June 7th, 1965.

Check out our personality summary for people who were born on June 7th, 1965.

Television shows that people were watching in June, 1965.

If you are looking for some childhood nostalgia, then you should check out June 7th, 1971 instead.

Adventurer / TV presenter.
Born on June 7th, 1974
He was born exactly 9 years after this date.

Former tennis player.
Born on June 7th, 1981
She was born exactly 16 years after this date.

Australian singer.
Born on June 7th, 1990
She was born exactly 25 years after this date.

National holidays and famous events that fall on the 7th of June.

Lyndon Baines Johnson was the President of the United States on June 7th, 1965.

Harold Wilson was the Prime Minister of the United Kingdom on June 7th, 1965.

Find out what your age was on June 7th, 1965, by entering your DOB below.
This information is not saved on our server.

Here are some fun statistics about June 7th, 1965.