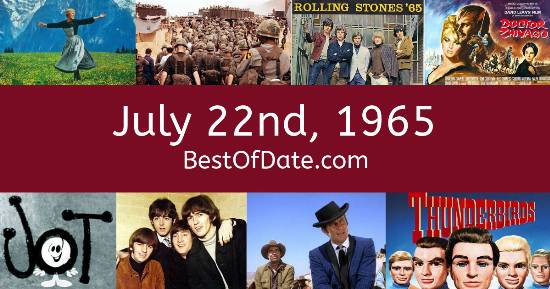 Songs that were on top of the music singles charts in the USA and the United Kingdom on July 22nd, 1965.

The date is July 22nd, 1965 and it's a Thursday. Anyone born today will have the star sign Cancer. It's summer, so the temperatures are warmer and the evenings are longer than usual.

In America, the song (I Can't Get No) Satisfaction by The Rolling Stones is on top of the singles charts. Over in the UK, I'm Alive by The Hollies is the number one hit song. Lyndon Baines Johnson is currently the President of the United States and the movie The Sound of Music is at the top of the Box Office.

American singer Bob Dylan has just released his new song "Like a Rolling Stone". If you were to travel back to this day, notable figures such as Walt Disney would be still alive. On TV, people are watching popular shows such as "The Andy Griffith Show", "Steptoe and Son", "The Farmer's Daughter" and "My Favorite Martian".

Children and teenagers are currently watching television shows such as "The Gumby Show", "Captain Pugwash", "The Adventures of Spunky and Tadpole" and "The Bugs Bunny Show". Popular toys at the moment include the likes of Tammy (doll), Big Loo, G.I. Joe: America's Movable Fighting Man and Motorific (slot car toys).

If you are looking for some childhood nostalgia, then check out July 22nd, 1971 instead.

Lyndon Baines Johnson was the President of the United States on July 22nd, 1965.

Harold Wilson was the Prime Minister of the United Kingdom on July 22nd, 1965.