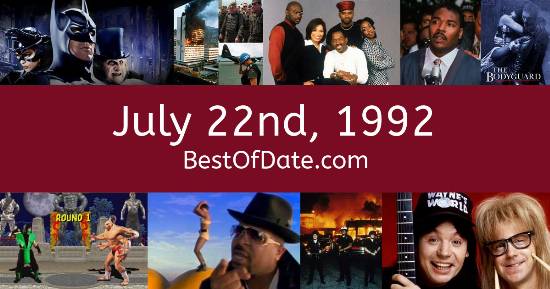 These songs were on top of the music charts in the United States and the United Kingdom on July 22nd, 1992.

The top "Box Office" movie on this date was the film "Honey, I Blew Up the Kid".

The date is July 22nd, 1992, and it's a Wednesday. Anyone born today will have the star sign Cancer. It's summer, so the temperatures are warmer and the evenings are longer than usual.

In America, the song Baby Got Back by Sir Mix-A-Lot is on top of the singles charts. Over in the UK, Ain't No Doubt by Jimmy Nail is the number one hit song. George W. Bush Snr. is currently the President of the United States, and the movie Honey, I Blew Up the Kid is at the top of the Box Office.

In gaming news, "Street Fighter II: The World Warrior" has just been released for the SNES. In celebrity news, singer Whitney Houston and Bobby Brown have just been married. In Sicily, judge Paolo Borsellino has been assassinated by a Mafia car bomb.

Fearing extradition to the United States, Colombian drug lord Pablo Escobar has recently escaped from his luxury self-designed prison near Medellín. If you were to travel back to this day, notable figures such as Anthony Perkins, Audrey Hepburn, Thurgood Marshall and Andre the Giant would all be still alive. On TV, people are watching popular shows such as "Full House", "Quantum Leap", "One Foot in the Grave" and "Dinosaurs".

Meanwhile, gamers are playing titles such as "Paperboy", "The Simpsons: Bart vs. the Space Mutants", "F-Zero" and "Teenage Mutant Ninja Turtles III: The Manhattan Project". Children and teenagers are currently watching television shows such as "Thomas the Tank Engine", "Adventures of the Little Koala", "Fireman Sam" and "Noozles". Popular toys at the moment include the likes of My Little Pony (figures), Micro Machines, Teenage Mutant Hero Turtles figures and Pogs / Milkcaps.

These are trending news stories and fads that were prevalent at this time. These are topics that would have been in the media on July 22nd, 1992.

Check out our personality summary for people who were born on July 22nd, 1992.

Television shows that people were watching in July, 1992.

Popular video games that people were playing in July of 1992.

If you are looking for some childhood nostalgia, then you should check out July 22nd, 1998 instead.

John Major was the Prime Minister of the United Kingdom on July 22nd, 1992.

Enter your date of birth below to find out how old you were on July 22nd, 1992.
This information is not transmitted to our server.