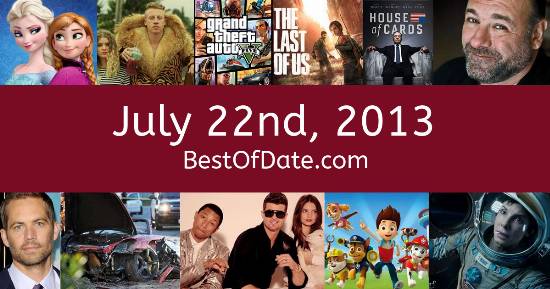 Songs that were on top of the music singles charts in the USA and the United Kingdom on July 22nd, 2013.

The date is July 22nd, 2013 and it's a Monday. Anyone born today will have the star sign Cancer. It's summer, so the temperatures are warmer and the evenings are longer than usual.

A social networking website called Vine is extremely popular at the moment. Former NSA contractor Edward Snowden has just revealed to the public that American intelligence agencies have been running a widespread global surveillance programme called PRISM. People are saddened by the news that Glee actor Cory Monteith has died following a drug overdose.

In the UK, Catherine Middleton has just given birth to Prince George. On TV, people are watching popular shows such as "Two and a Half Men", "Prison Break", "Breaking Bad" and "Glee". Meanwhile, gamers are playing titles such as "Sleeping Dogs", "Borderlands 2", "Call of Duty: Black Ops II" and "DmC: Devil May Cry".

Kids and teenagers are watching TV shows such as "Dora the Explorer", "Curious George", "Jake and the Never Land Pirates" and "Doc McStuffins". Popular toys at the moment include the likes of the Xbox 360, the PlayStation 3, Skylanders Giants figures and the Wii U.

If you are looking for some childhood nostalgia, then check out July 22nd, 2019 instead.

Barack Obama was the President of the United States on July 22nd, 2013.

David Cameron was the Prime Minister of the United Kingdom on July 22nd, 2013.