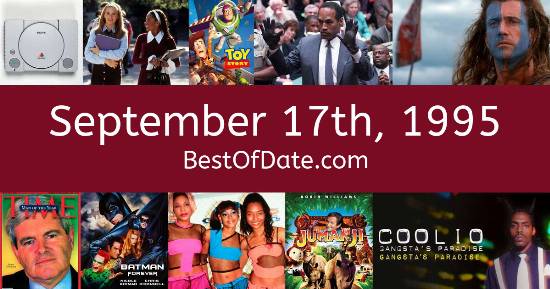 Songs that were on top of the music singles charts in the USA and the United Kingdom on September 17th, 1995.

The date is September 17th, 1995 and it's a Sunday. Anyone born today will have the star sign Virgo. Currently, people are enjoying their weekend.

Schools have started back and autumn has arrived, so temperatures have started to cool and trees are beginning to shed their leaves. The earthy smells of fall have started to fill the air. In America, the song Gangsta's Paradise by Coolio is on top of the singles charts.

Over in the UK, You Are Not Alone by Michael Jackson is the number one hit song. Bill Clinton is currently the President of the United States and the movie To Wong Foo... is at the top of the Box Office. In the United Kingdom, John Major is the current Prime Minister.

Meanwhile, CDs have become the dominant format for music. People are buying CD players and the portable CD players such as the "Discman". As a result, the older cassette tape format is continuing to decline in sales. It's 1995, so radio stations are being dominated by the likes of Celine Dion, Everything but the Girl, Coolio, Oasis, Michael Jackson, Boyzone, Madonna, Montell Jordan, TLC and Mariah Carey. Former football player O.J. Simpson is currently being tried for the murder of his ex wife and her friend.

In Europe, a war is continuing to rage on in Bosnia and Herzegovina. Following the recent shelling of the Sarajevo market place, NATO has decided to intervene. NATO forces are now carrying out a sustained air campaign against Serbian forces. A new video game console called the PlayStation has just been released by Sony. If you were to travel back to this day, notable figures such as Yitzhak Rabin, Stretch, Roxie Roker and Dean Martin would all be still alive.

On TV, people are watching popular shows such as "Beverly Hills, 90210", "The X-Files", "Party of Five" and "Star Trek: Voyager". Meanwhile, gamers are playing titles such as "Mortal Kombat II", "Warcraft: Orcs & Humans", "Theme Park" and "Command & Conquer". Children and teenagers are currently watching television shows such as "Married... with Children", "The Simpsons", "Mighty Morphin Power Rangers" and "The Nanny".

If you're a kid or a teenager, then you're probably playing with toys such as Super Soaker (water gun), Nerf Blaster, Littlest Pet Shop and Sky Dancers.

If you are looking for some childhood nostalgia, then check out September 17th, 2001 instead.

Bill Clinton was the President of the United States on September 17th, 1995.

John Major was the Prime Minister of the United Kingdom on September 17th, 1995.

Enter your date of birth below to find out how old you were on September 17th, 1995.

Here are some fun statistics about September 17th, 1995.