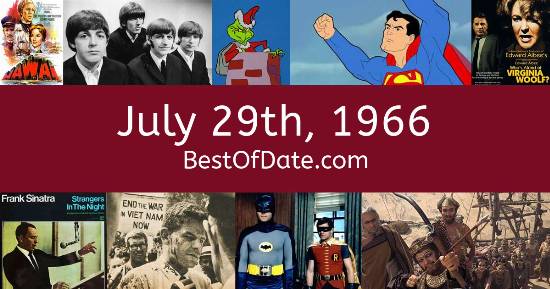 Songs that were on top of the music singles charts in the USA and the United Kingdom on July 29th, 1966.

The date is July 29th, 1966 and it's a Friday. Anyone born today will have the star sign Leo. Currently, people have "that Friday feeling" and are looking forward to the weekend.

It's summer, so the temperatures are warmer and the evenings are longer than usual. In America, the song Hanky Panky by Tommy James & Shondells is on top of the singles charts. Over in the UK, Get Away by Georgie Fame is the number one hit song.

The 1966 FIFA World Cup is currently taking place in England. On TV, people are watching popular shows such as "Bonanza", "The Andy Griffith Show", "Hullabaloo" and "Dark Shadows". Kids and teenagers are watching TV shows such as "Lassie", "Heckle and Jeckle", "The Bugs Bunny Show" and "Atom Ant".

Popular toys at the moment include the likes of Mouse Trap, Barrel of Monkeys, Twister mat and Suzy Homemaker.

If you are looking for some childhood nostalgia, then check out July 29th, 1972 instead.

Celebrities, historical figures and notable people who were born on the 29th of July.

Lyndon Baines Johnson was the President of the United States on July 29th, 1966.

Harold Wilson was the Prime Minister of the United Kingdom on July 29th, 1966.