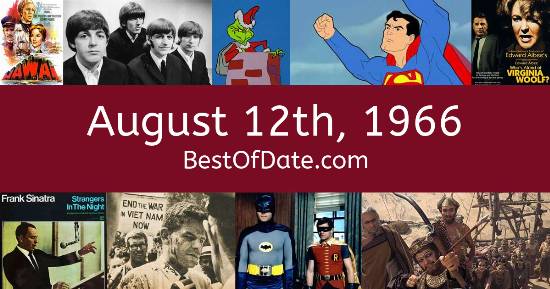 Songs that were on top of the music singles charts in the USA and the United Kingdom on August 12th, 1966.

The date is August 12th, 1966 and it's a Friday. Anyone born today will have the star sign Leo. Currently, people have "that Friday feeling" and are looking forward to the weekend.

On TV, people are watching popular shows such as "The Ed Sullivan Show", "What's My Line?", "The Andy Griffith Show" and "Dark Shadows". Children and teenagers are currently watching television shows such as "Captain Kangaroo", "The Mighty Hercules", "Ricochet Rabbit & Droop-a-Long" and "JOT the Dot". If you're a kid or a teenager, then you're probably playing with toys such as Tammy (doll), G.I. Joe: America's Movable Fighting Man, Rock 'Em Sock 'Em Robots and Suzy Homemaker.

If you are looking for some childhood nostalgia, then check out August 12th, 1972 instead.

Lyndon Baines Johnson was the President of the United States on August 12th, 1966.

Harold Wilson was the Prime Minister of the United Kingdom on August 12th, 1966.

Enter your date of birth below to find out how old you were on August 12th, 1966.